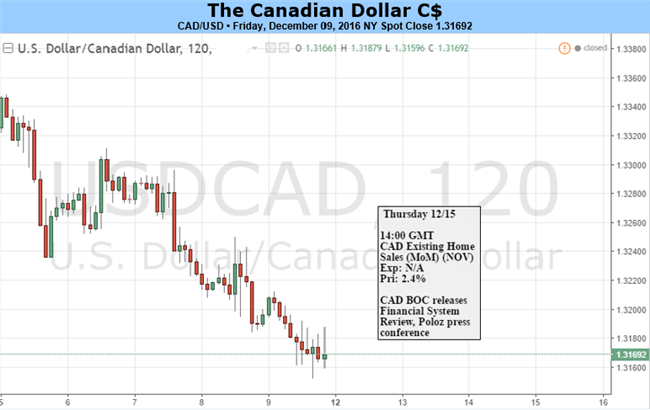 On Wednesday, the Bank of Canada Rate Decision and subsequent press conference was supportive of more Canadian Dollar strength as Stephen Poloz spoke without mention of weakening the CAD to support weakening export volumes. After holding rates steady at 0.5%, Thursday’s Building Permits data shocked many as expectations for 1.5% MoM came in at 8.7%, which added to the confidence that Canada might have avoided an economic downturn with a confident BoC. The Bank of Canada also noted that some of the fiscal effects of PM Trudeau are yet to show up in economic data, which means more surprises could be on the way.

Next week is expected to be a quiet week regarding economic releases. The main print will come on the Thursday with the Manufacturing Sales, which is a healthy component of GDP albeit, not tier-1 data.

Traders will likely continue to keep an eye on U.S. Yields as an indication of pending global inflation through the new world order of trade that is expected to begin under the new U.S. Administration that takes office on January 20. The one component of the next four years that traders appear confident in is that inflation will find its way into the world through reversing free-trade and favoring high-wage (relative to a global scale) producers then have been observed in EM that began to dominate the world’s consistent price declines from 1980s-2010s. 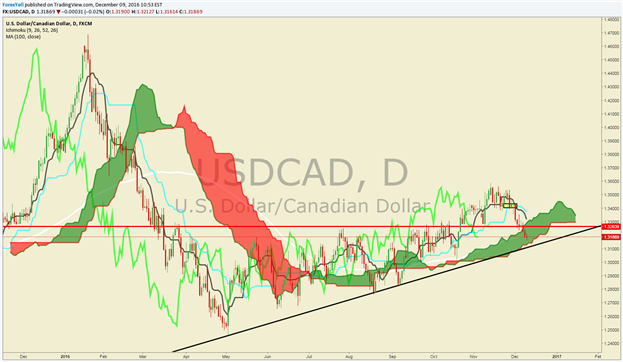 Technical & Macro Outlook: Friday’s run higher in the Canadian Dollar had the CAD as the only pair in Friday morning trading atop the U.S. Dollar. There appears to be less and less of a compelling case for CAD weakness given recent Bank of Canada rhetoric and the sticky Oil price above $50. A further push higher in Oil could provide some fiscal stability to Canada and keep the CAD strengthening.

The technical picture has USD/CAD sitting atop a mountain of chart support. The key chart supports include the 100-DMA (1.3193), the base of the Ichimoku Cloud (1.3127), and a trendline drawn from the May and August low. However, there are no guarantees in markets that support will hold and a break below support could show a cycle of Canadian Dollar strength, which may cause the Bank of Canada to be a bit more vocal on measures to support manufacturing and exports with a weaker Canadian Dollar.

As of mid-December, there appears to be momentum building for further CAD performance especially against weaker FX like JPY & EUR, and possible GBP.