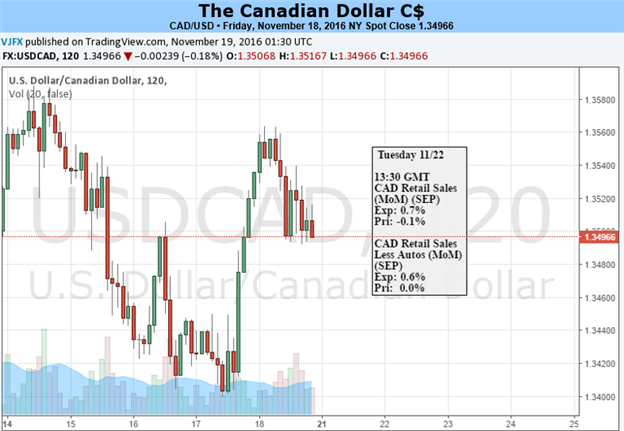 The Bank of Canada moving back into a dovish posture has been expected for a while now. As we came into 2016, the Canadian Dollar was mired in a continued descent; and when paired-up with what was an extremely strong U.S. Dollar on the back of hopes/thoughts/fears of a full four interest rate hikes from the Federal Reserve in 2016, this created a real quagmire of a situation for Canadian importers. With the heavy amount of cross-border trade taking place between the U.S. and Canada, this weakening Canadian Dollar helped to show inflationary forces fairly quickly, bringing on issues such as the ‘Canadian Cauliflower Crisis.’

Something had to be done, and in January we saw Bank of Canada Governor Stephen Poloz guide the bank to take a backseat to monetary stimulus in order to allow newly-installed Prime Minister Justin Trudeau to embark on fiscal stimulus measures. From mid-January until early-May, the Canadian Dollar strengthened massively. But this strength came-in at a rough time for the Canadian economy: This was also around the time that Oil prices were recovering, which would normally have been a huge benefit for Canada, but given this additional CAD-strength, much of that benefit of higher Oil prices was largely erased. The Canadian economy continued to struggle, and given that strong-CAD for much of the first-half of the year, Canadian exports got punished, printing at historically-weak levels.

As we waded through the summer, the realization began to proliferate that, once again, something must be done. In mid-October, we wrote that the Bank of Canada would likely communicate that dovishness via inflation forecasts in their Monetary Policy Report. Should the bank guide inflation forecasts significantly lower, the prospect of additional stimulus could become more likely. But when delivering those forecasts, Mr. Poloz went even more-dovish than that when he mentioned that the BoC had went so far as to discuss additional monetary stimulus. This caught many by surprise, and in short order USD/CAD had reversed off of the 1.3000-level to run up to fresh resistance at 1.3400.

Only a few days later, Mr. Poloz attempted to back-track on the monetary stimulus-talk, adding the context of ‘about 18 months’ for when the bank might be looking to kick-up additional efforts to weaken the CAD. But by then, it seemed as though it was already too late. In an economic world that’s denominated by monetary policy, simply having a Central Bank saying that their door is open to more can be enough to keep sellers interested and waiting, and in the weeks since that most recent Bank of Canada rate decision, the Canadian Dollar has continued to weaken as sellers have refused to abate.

The luxury of such an environment is that it can offer slightly-cleaner price action observations. Given that we know that the BoC is open to more stimulus, they’ll likely only look to go further in the event that growth and inflation remain weak. As inflation remains weak, this can be seen as increasing the probabilities of even more stimulus; so we can see a direct-relationship build between data prints and price action in CAD. Bad or weak data brings on even more weakness into CAD.

The next ‘big’ driver for the CAD likely won’t come until we move into the New Year. The Bank of Canada updates inflation forecasts as part of their Monetary Policy report, and this only happens every other rate decision. The next Monetary Policy Report is due at the bank’s January rate decision on the 18th. On December 7th the bank will publish an interest rate announcement along with a statement, but given that there are virtually no hopes for any changes to interest rates, the statement will be the likely driver here.

For the week ahead, Canadian data is relatively light as the U.S. goes on holiday on Thursday for Thanksgiving. Wholesale Sales are released on Monday, and Retail Sales on Tuesday in which a contraction of -.1% is expected. Perhaps more interesting in the immediate-future is how the Canadian Dollar responds to long-term support values (resistance on USD/CAD). The 1.3450-1.3550 zone has been a critical level in USD/CAD for a long time, providing a strong element of support in the mid-1990’s and, more recently as resistance in September of 2015 and then again over the past three weeks.

How the currency responds to this support will be telling of trends in the near-term, and until more information is made available on this theme, the forecast for CAD will remain at neutral. – js