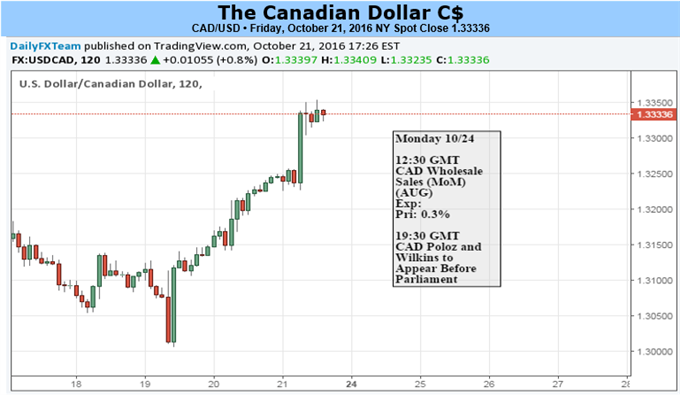 Due to some disappointing data points after the Bank of Canada Monetary Policy Report and Press Conference, the Canadian Dollar fell from a high of 1.3005 vs. the US Dollar to 1.3350 on Friday morning after disappointing retail sales may add to Bank of Canada Governor Stephen Poloz’s comments. The yield on the Canadian 2-yr government bond fell for the fifth consecutive day for its sharpest weekly decline since June.

The disappointment for the Canadian Economy started at the press-conference after the Monetary Policy Report was released and a maintaining of the 0.5% interest rate that was widely expected. Stephen Poloz noted that the Bank had discussed stimulus at their meeting, which was the kick-off on the move higher in USD/CAD from 1.3005 to the Friday morning high of 1.3350.

The capstone to the week for the weakening Canadian Dollar was a statement by Canadian Trade Minister Chrystia Freeland walked out of the negotiations with the European Union in Belgium. Freeland held a press conference after walking out saying in her native tongue, “It is evident to me, for Canada, the European Union is not capable right not to have an international pact even with a country that has European values like Canada.” Freeland also went on to say the deal seems “impossible.” For what it’s worth, this could also paint a dark cloud over pending Brexit negotiations that will look to draft up a new trade agreement once PM Theresa May and Parliament agree to trigger Article 50.

Preceding the “impossible” free-trade negotiations with EU, Friday morning saw Canadian retail sales for August drop by -0.1% vs. 0.3% estimates. The number was likely a bigger blow than a typical miss because of the Fiscal Stimulus enacted by the government earlier this year was shown in this print to not having its intended effect. On top of the headline print, there was a downward revision to July numbers. While Core CPI was in line, many were hoping the rally in Crude Oil would take CPI over the top, but it did not.

Where are financial markets heading into the fourth quarter? See our forecast and find out!

The main economic data point for the week ahead is Monday’s Wholesale Trade Sales MoM, which will look to improve over July’s number of 0.3%. There will likely be a speech by PM Trudeau either over the weekend or early next week to discuss what the next steps will be for the trade negotiations with the European Union. He has already had stern words for the EU, and they’ll likely stay heated following Freeland’s experience in Belgium. The fundamental bent appears to remain bearish for the Canadian Economy until we see the homeland data start to pick-up beyond the recent employment surprise.

USD/CAD took us beyond the recently strong resistance of the 38.2% Fibonacci retracement level from January highs to May lows at 1.3312. The next key Fibonacci zone in focus is the 50% retracement at 1.3575.

Given the significant positive correlation between the price of WTI Crude Oil and the Canadian Dollar, traders should keep an eye on the latest news surrounding the potential OPEC accord and the direction of Oil. Oil recently traded at 15-month highs, but as you can see in the chart below, the Canadian Dollar has fallen despite Oil’s rise. If Oil can accelerate higher the downside for the Canadian Dollar may be limited. However, if Oil cannot remain at or above $50/bbl, it will be difficult to see where economic growth could originate. 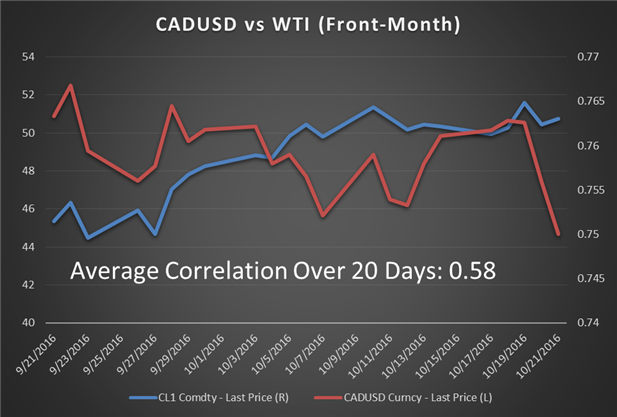