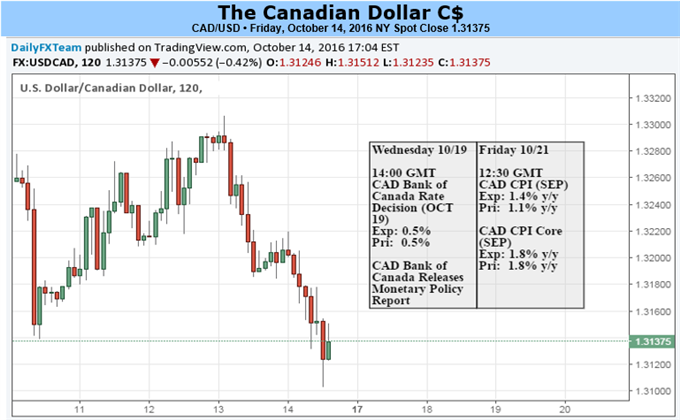 The Canadian Dollar will look toward the Bank of Canada Rate Announcement and subsequent statement to see whether or not there are signs of encouragement in the Canadian economy. Last Friday, the Canadian employment figures shocked the world and took the Citi Economic Surprise Index for the Canadian Economy up a few peg. The expectations for net change in employment was 7.5k, and the final number came in at 67.2k.

The good data continued to flow into the Housing Starts data on Monday that showed 220.6k new houses were going up compared to expectations of 190k. Markets are continuing to see how Canada readjusts to the multi-year drop in Oil, which triggered Justin Trudeau's Fiscal Stimulus that is designed to help trade and manufacturing plug some of the holes that energy left in the economy.

Earlier this month, Senior Deputy Governor Carolyn Wilkens spoke about the progress and setbacks in the economy and how the Bank of Canada works to achieve the 2% inflation target. She didn’t sound too confident in the patch forward, but there are signs of hope in Canada’s economy as Oil has recently moved back above $50/bbl on news of the possible OPEC accord that will be verified or invalidated at the official November meeting.

Where are financial markets heading in the fourth quarter? See our forecast and find out!

The heavy economic data point this week will take place on Wednesday, which will be the October 19 Bank of Canada Policy Rate announcement and release of the Monetary Policy Report. Traders will be on watch for how the Bank of Canada is seeing stabilization in the energy sector, whether or not there is a continued pickup in the non-commodity exports to emerging economies, and how they see growth in the rest of the economy.

Few currencies have fared well against the US Dollar, which has risen ~3% since mid-September on renewed hopes of a hawkish Federal Reserve. However, the bigger picture shows that the Canadian Dollar could resume strengthening in a similar, albeit likely weaker fashion as the January to April run.

The price of the Canadian Dollar has fallen to the 38.2% Fibonacci Retracement level of the January-May range at 1.3312 in a wedge formation. Wedges can be an indication of an ending pattern or signal exhaustion of a move. If the price of Oil is above $51.64 and continues to rise in the weeks ahead, we could be on our way to testing pattern support near 1.3000, followed by 1.2820. A break below 1.2820 would begin to raise the probability of a Canadian Dollar breakout across the board. However, until these levels are triggered on Canadian Dollar strength or USD weakness, we’ll continue to favor the choppy moves higher that we’ve seen since August.