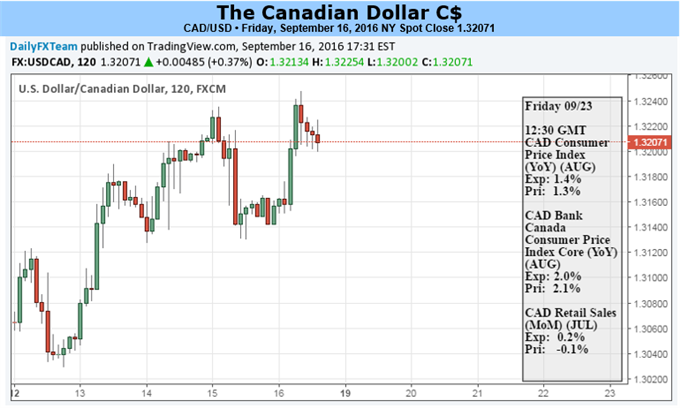 The Newest Threat to the Canadian Economy: Donald Trump Presidency 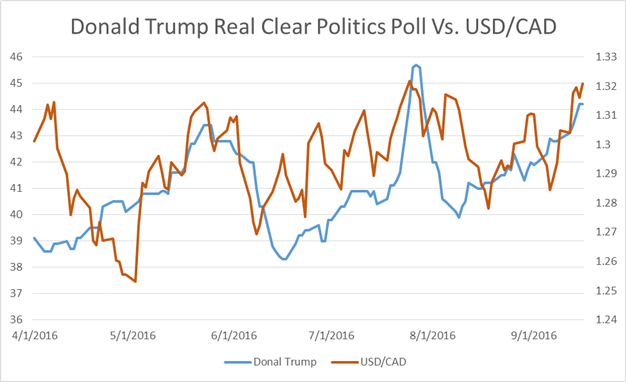 Donald Trump is rising in the polls for the November 8 US Presidential Election as shown above. Much of the rise has turned the focus on Donald Trump’s Trade Plans for Canada’s largest export destination, the United States. Last week, Donald Trump did not mince words when he stated that in his view, the North American Free Trade Agreement or NAFTA was the, “worst trade deal in the history of the [U.S.].” The combination of Trump’s America First focus or so-called, protectionist policies has made major U.S. trade partners such as Mexico & Canada have seen their currencies weaken. Unfortunately, the Canadian economy has been unable to dodge the pain of Oil weakness by leaning on trade growth, and manufacturing through a weaker Canadian Dollar.

On Friday, the Mexican Peso dropped to new all-time lows. While the Canadian Dollar is a long way away from all-time lows, there is a significant perceived threat to Canada’s place as a privileged trade partner. Options markets are beginning to see action in the 1.40 strike area that may be indicative or where the FX market would focus should Trump continue to gain in the polls while touting a new Trade Agreement.

Two other components that are not helping the Canadian Dollar recently is the resilient US Dollar and the drop in the price of Crude Oil, which is testing 1-month lows ahead of the September 27 OPEC and Russia meeting in Algeria. The market will likely sell Oil if no agreement is reached to cap production, which would presumably put selling pressure on the Canadian Dollar as continued oversupply would make higher Oil prices less appealing. Lastly, we are less than a week away from Super Wednesday when the Federal Reserve, Bank of Japan, DoE data, & RBNZ is released within 24-hours. Anything that causes the US Dollar to strengthen from here would likely put downward pressure on the Canadian Dollar, and we could see USD/CAD move well above the 200-DMA next, which currently sits at 1.3253.

The heavy economic data points this week will take place on Friday, which will be after the dust settles from the international development such as the Central Bank triple-header on September 21. On Tuesday, Bank of Canada Governor Stephen Poloz will be speaking in Quebec City, which will be followed by a press conference. Friday will provide the Canadian Dollar an opportunity to reverse its trend of negative economic surprises with Retail Sales (exp. -0.1 MoM), and the Consumer Price Index (exp. 1.3% YoY.) Because this is the key gauge for inflation in Canada, a disappointment here coupled with positive developments south of the Canadian Border could put further selling pressure on the Loonie.