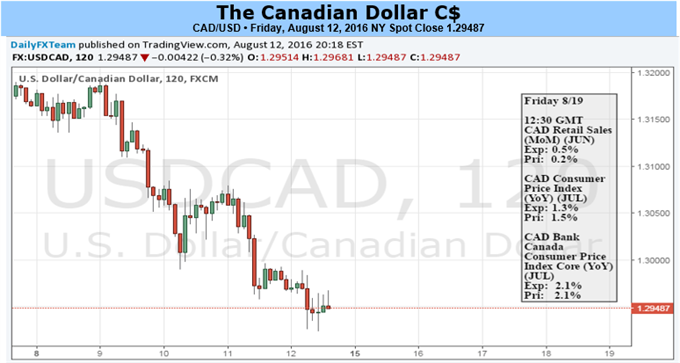 The recent string of lower highs & lows in USD/CAD accompanied by the mixed data prints coming out of the U.S. raises the risk for a further decline in the exchange rate especially as economic developments coming out of Canada are anticipated to show sticky price growth paired with a pickup in private-sector consumption.

USD/CAD may continue to carve a bearish pattern over the coming days as the slowdown in U.S. Retail Sales fuels fears of a weakening recovery, and the Federal Open Market Committee (FOMC) Minutes due out on August 17 may spur a limited market reaction as the majority continues to endorse a wait-and-see approach for monetary policy. With that said, the U.S. data prints on tap ahead of the Fed’s Economic Symposium scheduled for later this month may fail to move interest-rate expectations as central bank officials appear to be in no rush to raise the benchmark interest rate. Market participants are likely to pay close attention to the fresh rhetoric from Atlanta Fed President Dennis Lockhart, St. Louis Fed President James Bullard, New York Fed President William Dudley and San Francisco Fed President John Williams especially as Fed Funds Futures continue to highlight limited expectations for a 2016 rate-hike, but more of the same from central bank officials may ultimately generate near-term headwinds for the greenback as market participants push out bets for higher borrowing-costs.

At the same time, stickiness in Canada’s Consumer Price Index (CPI) paired with a pickup in Retail Sales may encourage the Bank of Canada (BoC) to gradually move away from its easing cycle, and the loonie may continue to outperform its U.S. counterpart over the near-term as Governor Stephen Poloz looks poised to keep the benchmark interest rate on hold at 0.50% throughout the remainder of the year. Even though the BoC anticipates the ‘output gap will close somewhat later than estimated,’ it seems as though the central bank will stick to the sidelines at the next interest-rate decision on 7 as ‘inflation has recently been a little higher than anticipated,’ with the Governor Poloz and Co. largely arguing that the risks surrounding the inflation outlook ‘roughly balanced.’ 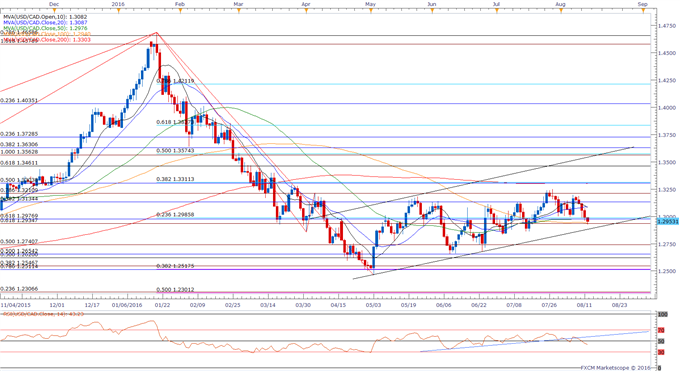 USD/CAD may threaten the upward trend from earlier this year as the pair carves a near-term series of lower highs & lows, while the Relative Strength Index (RSI) fails to preserve the bullish formation from June. In turn, a break of the July low (1.2830) may foreshadow a shift in the broader trend, and the dollar-loonie may give back the advance from the May low (1.2460) as it breaks below near-term support around 1.2930 (61.8% expansion) to 1.2980 (23.6% retracement).