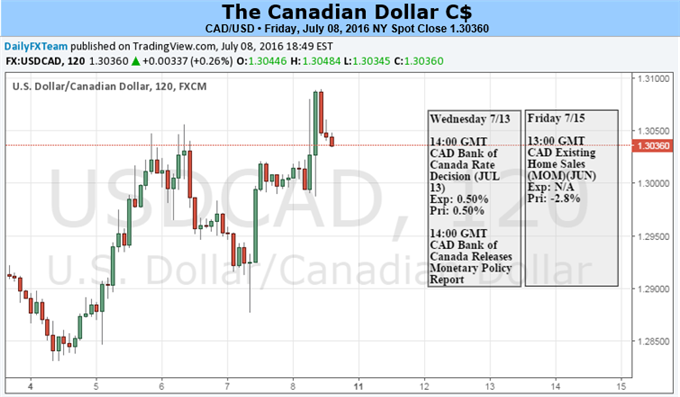 In addition to tier-1 data reports, traders will look toward the Bank of Canada rate announcement. The BoC on Wednesday should provide direction on the future of reference rates as well as the Canadian Economy in light of the ripple effects of the Fort McMurry fire, which has been labeled as the costliest insured disaster on record as insurers face ~C$3.5B in claims.

The two key data points for last week were Canada’s trade balance and Friday’s employment numbers. Trade balances were soft and both the United States and Canada, but Canada’s print will likely leave the largest out and traders minds. Canadian exports fell by 0.7% MoM & imports, -0.8% MoM. Wednesday’s report was Canada’s second widest deficit on record. This week print provided support for USD/CAD in the 1.3000 region.

In addition to a disappointment deficit widening report on Wednesday, was Friday’s rather soft employment data. After an impressive may report economists expected a gain of 5000 jobs and were met with a loss of -0.7k.

What was worse than the headline print was that there was a -40.1k loss in full-time employment that was nearly balanced by the rise in part-time employment of +39.4k. Naturally, that is not an encouraging trend for an economy after the disappointing trade balance.

Stephen Poloz will likely respond to the deficit, and weak jobs report in June showing the increase in part-time jobs and drop in participation rate when the BoC announces their rate decision on Wednesday.

We have heard the Bank of Canada voiced concern over slack in the job market while being encouraged by his services and non-energy export-led recovery. Last week’s trade balance and employment report may change their tone to either a more accommodative stance or at least a lower rates for longer positioning to help the economy find its footing.

Crude Oil (CFD: US Oil) appears to be setting the stage for a move higher in USD/CAD. Over the last four weeks, crude oil has fallen nearly 13% as fears of a global slowdown pick up after the Brexit vote on June 23.

Surprisingly, one thing not lifting the USD/CAD is the Federal Reserve’s 2016 and beyond interest rate path. Even after a strong US Non-Farm Payroll on Friday, the market appears to think it means little for US Dollar and the Fed Policy Outlook.

An unwillingness to hide does not necessarily mean USD/CAD will fall. We could see a move higher in the pair if oil continues to drop or dollar regains a spot as a haven currency thanks to its unusually high government debt yield and credit rating. 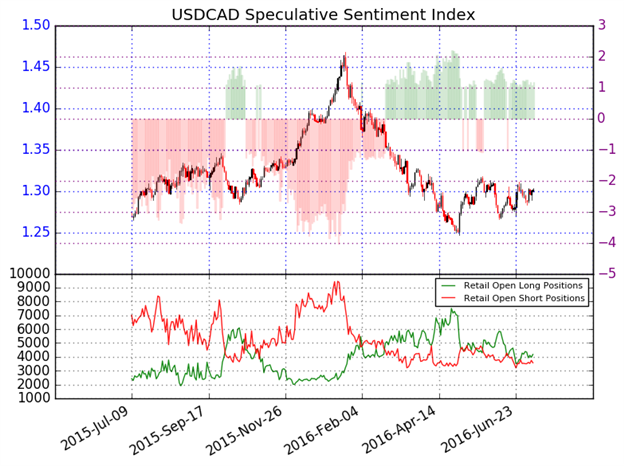 The chart above can help you see how sentiment shows turns in the market as well as acceleration points. When looking at sentiment,crowd sentiment has moved positiveproviding favor for more downside. Throughout June, the trend has stabilized as retail USD/CAD longs remain in the lead. However, the chart below showing open retail positioning displays little conviction on either side.