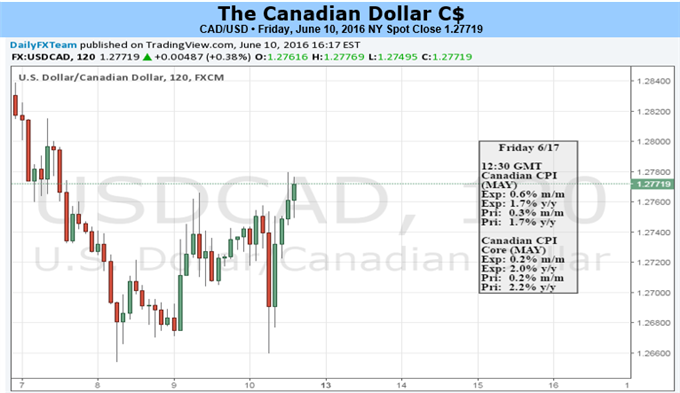 USD/CAD dropped aggressively on Friday when Canada Released May Employment figures that far surpassed what economists were expecting. Expectations were around 1,750 gain in employment, but the print at 13,800 brought USD/CAD down by ~80 pips. While the drop retraced going into Friday’s close, the trend of Canada’s economic data is clear, and it’s strong where many others are weak.

The economic trend has impressed Canadian Dollar Bulls and depressed Canadian Dollar bears. Many see the markets as a game of expectations, and the Canadian Economy continues to defy expectations. Many traders thought the tragic wildfires in Alberta would halt hiring or hurt the economy, but it appears that Trudeau’s reform package is lifting the economy to relative great heights.

In addition to today’s impressive Employment report that also showed the unemployment rate drop to 6.9%, well below expectations of 7.2%, there are new commitments from businesses coming to Canada that could continue to lift the economic picture. On Friday, PM Trudeau spoke in Oshawa, Ontario about the upcoming General Motors investment for high-end automotive R&D that could lead to further well-paying jobs and also display the economies ability to diversify away from the oil industry.

Canadian Consumer Price Index, which has been the envy of many central bankers, will be released on Friday. The prior print of 0.2% is expected to maintain at 0.2% with a possible weakening in the YoY component of 2.0% down from 2.2%. Many are looking to CPI to indicate softness in the Canadian economy, but as noted earlier, they have to look hard to find weakness compared to other economies, and many are coming up empty as economic data points continue to surprise economist.

A minor data point compared to the inflation reading on Friday will be the Manufacturing Sales on Wednesday. The prior print of -0.9% MoM and 3.1% annualized will be a basis to compare Wednesday print. However, the print will be discounted given the large macro even south of the border when the Federal Reserve releases their June rate decision at 2:00 pm EST.

The Federal Reserve’s 2016 interest rate path has been less stable than the flight of a happy bumble bee. At the start of the year, we were coming off the December hike and a Dot Plot that showed four expected rate hikes from the Federal Reserve. As of mid-may, many felt that we’d come down to two rate hikes. However, looking at the interest rate probabilities data from Bloomberg, the only priced in rate hike (> 50% probability of a 25bp hike) is the December meeting.

Either way, a continuation of doubtful future rate hikes from the Federal Reserve, thanks likely in large part to an abysmal May employment report last Friday would further widen the spread between the trajectory of Canada’s economy and that of the United States. Similarly, we could continue to see gains in the Loonie relative to the greenback.

The chart above can help you see how sentiment shows turns in the market as well as acceleration points. When looking at sentiment, crowd sentiment has moved positive providing favor for more downside. In the second-half of May, the trend has picked up acceleration as more retail USD/CAD longs join the act. This loading in is visualized with the green line below the sentiment and price chart.