The Canadian Dollar has been on a run that likely has more gas in the proverbial tank that could mean further CAD gains. Friday ended last week with an impressive 40,600 jobs gained in March, which also aligned with gainsinWTI Crude Oil, which appears to be on the verge of breakingabove the 200-DMA for the first time since H1 2014.

The latest tally of Canadian Dollar strength against the US Dollar stands as a gain of 1,832 pips as of last week’s low of 1.2856 or ~12.5%. The catalyst for this move was a rate hold by the Bank of Canada on January 20 when a cut was priced in along with future rate cuts because the drop in Oil prices appeared to be wreaking havoc on the economy. However, Bank of Canada governor Stephen Poloz’s confidence in the Canadian economy then may be echoed when they meet on Wednesday.

In addition to Wednesday’s data next week will bring Canadian New Housing Price Index & Manufacturing Sales on Thursday & Friday respectively.They will be in the shadow of Wednesday’s data, but should not be ignored and may be a confirmation on the upswing of Canadian data if either or both data points beat economist’s expectations.

While the Bank of Canada rate decisioncall is expected to be no move, the release of the Monetary Policy Report will likely show the bank is raising their growth forecasts and confidence on the economy’s ability to withstand the 2015 drop in Oil prices.

The apparent developing irony in the Oil market is that we are likely yet to fully grasp the damage done to Oil & gas companies and their respective economies even with the ~60% rise in Oil prices off the February 11 low. There has been a rise in Oil companies defaulting on their debt, and given the debt burden many E&P companies hold, it is near impossible for many firms to borrow their way out of this mess as well as banks have been cutting open lines as well on the price drop. Increased bankruptcies in the industry may lead to volatile jobs reports over 2016 in Canada, butif other sectors can continue to make up for the Energy Industry Job losses,the Canadian Dollar could still havea strong month.

Another component that could lead to the price of USD/CAD falling in addition to Crude Oil gaining is the recent weakness of the US Dollar. Janet Yellen of the Federal Reserve has recently mentioned the US Dollar as a headwind to global growth and therefore, the Fed may ensure that rhetoric appears less US Dollar supportive, which would further push the cause of commodity strength like Gold & Oil in addition to US Dollar counterparts. 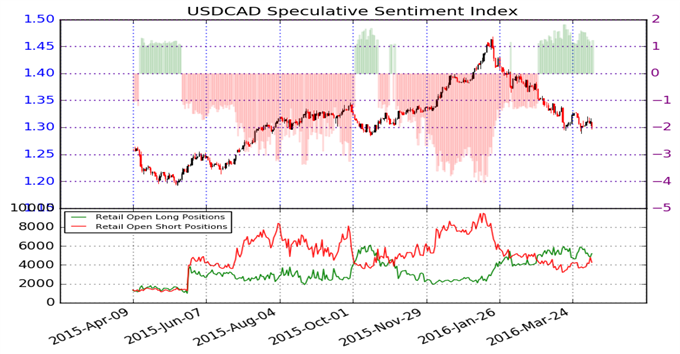 The chart above can help you see how sentiment helps you see turns in the market as well as acceleration points. When looking at sentiment,crowd sentiment has moved positiveproviding favor for more downside. Since mid-March, the trend appears to lack acceleration, but if more retail USD/CAD longs join the act, we could see further downside. We use our Speculative Sentiment Index as a contrarian indicator to price action, and the fact thatthe majority of traders are net-long at a bull: bear of 1.22 as 55% of traders are long of traders are long means that a bearish USD/CAD signal is currently at play. As of Friday, long positions are 10.5% higher than yesterday and 8.2% below levels seen last week.