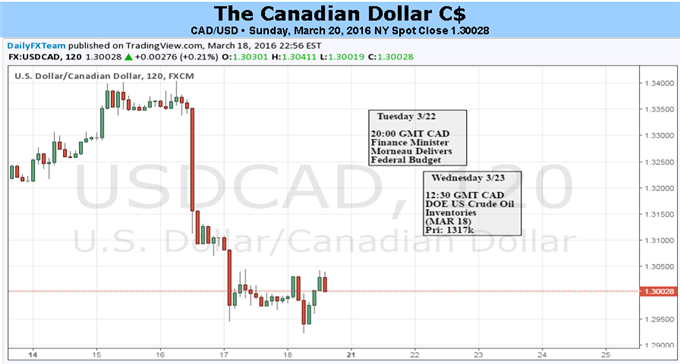 - The Canadian Dollar has been looking forward to this week since the October elections.

The moment the Canadian Dollar has been waiting for is indeed on the horizon: the new federal budget announcement brought forth by the government under new Prime Minister Justin Trudeau (Finance Minister Bill Morneau will unveil the budget – akin to Chancellor of the Exchequer George Osborne revealing the UK budget last week). Markets have been building up expectations for a new swath of policy measures aimed to help support the Canadian economy for a while now, at least since October 2015, when the Liberal party swept elections into power.

Yet the real turning point came in January 2016, which was a step towards crystallizing the hopes brought forth in October: the Bank of Canada announced that it was withholding further monetary easing in advance of impending changes to the federal budget. Regarding the expected shift in policy, we immediately suggested that the acknowledgement of the policy pivot “should be to the Canadian Dollar’s benefit over the long-term.”

USD/CAD and the other CAD-crosses could easily reverse some of their recent moves in the event that Trudeau & co let down expectations, but expectations are so dispersed, that the probability of this being a sincere turn a la “buy the rumor, sell the news” seems rather low. For context, in last year’s April federal budget, the Canadian ledger was turning a surplus thanks to the austerity measures imposed by the Harper government. Yet the rapid deterioration in oil prices (which reduces companies’ revenues, and therefore, the tax base) had quickly erased any budgetary goodwill left in the tank.

While a deficit is thus to be expected, it will become more pronounced once the latest round of stimulus measures are revealed. The estimates – again, widely dispersed – are calling for somewhere between C$10 billion and C$25 billion in government spending.

Why does the expected increase in deficit spending portend favorably, as it has in recent weeks, for the Canadian Dollar? Under the Mundell-Fleming model (or the IS-LM-BoP model), exchange rates are expected to depreciate when central banks ease or fiscal spending drops, and exchange rates are expected to appreciate when central banks tighten policy or fiscal spending increases. The rationale is logical: if aggregate demand is above prior expectations, changes are good that inflation runs higher, and that central banks will need to tighten monetary policy. Essentially, expansive fiscal policy and restricted monetary policy should have the same impact over the long-term: a stronger local currency.

We still maintain that the narrative for the Canadian Dollar has shifted to a more optimistic tone. Recall that, at this point in 2015, market sentiment was purely focused on weaker Crude Oil, a surprisingly dovish BOC, and a government that was anti-fiscal stimulus.Now, Crude Oil prices have stabilized, the BOC has adopted a more neutral tone, and the government is about to unveil new stimulus measures. 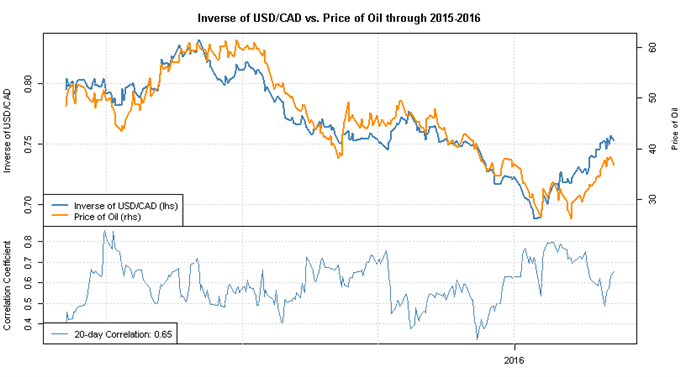 Granted, a good a part of the Canadian Dollar’s turnaround in recent weeks can be attributed to the rebound in Crude Oil prices, no doubt. Yet there is something to be said about the Loonie’s performance relative to energy prices, which is why we hang so much significance on the upcoming fiscal stimulus announcement. Even as Crude Oil has rebounded, the Canadian Dollar (via USD/CAD) has outperformed its counterpart, causing the 20-day rolling correlation to erode to +0.65 by the end of last week (chart 1 above).

Crude Oil prices are clearly important to the Canadian Dollar (causation flows in one obvious direction), and regardless of the budget announcement on Tuesday, March 22, further upside in commodity prices will likely prove to help keep the Loonie insulated from too great of losses around a stimulus disappointment. Fortunately, unlike Vladimir and Estragon stuck toiling for the eponymous character in Beckett’s “Waiting for Godot,” the Canadian Dollar will not have to wait endlessly for Trudeau’s new measures. –CV