This week’s moves have put the Bank of Canada, and CAD traders in a precarious position. From the Bank of Canada’s position, you have a stronger currency as the CAD continued rallying this week while at the same time, the data is showing less stability in the economy. Should this trend continue, we’ll eagerly look to the March 9th Bank of Canada meeting for a less confident tone from Stephen Poloz, which could continue the weak CAD theme.

Friday quelled many of the traders who thought the CAD would continue strengthening without rest. In fact, many commodity currencies end the Friday near lows of the day as the supportive US economic data rekindles thoughts about a rate hike from the Fed could further hamper commodities and global trade.

Canadian unemployment rose as Alberta, home of Athabasca tar sands, had the highest unemployment since 1996. The Employment change of -5,700 was a disappointing follow-up to January’s 24,100 job gain. In addition to the employment number the housing starts missed survey estimates of by a large margin of 20,000.

Next week, the economic prints carry less significance than we just saw that could leave a bad taste in traders and the Bank of Canada’s mouth. The important data next week ill be in the manufacturing industry that has been much less robust than the exporting side of the economy that the Bank of Canada praised as resilient on the back of a weaker Canadian Dollar.

From a sentiment perspective, we've seen traders through our speculative sentiment index or SSI fighting the latest move as USD/CAD has dropped. Toward the close of the week, traders were nearly flat with a small short bias. This move represents a substantial shift in retail forex trader positioning over the last two week. Our data shows there are currently 1.13 open retail short positions in the USD/CAD for every one that is long as 47% of traders are long. As you can see on the # of bullish & bearish orders below, this represented a notable swing from three weeks ago when that ratio exceeded 4 to 1.

In early 2015, we saw similar moves in sentiment that were developing as price retraced a good bit of the prior trend. However, when the retail sentiment turned net short and by an increasing margin, the move higher resumed. If the net short bias is able to reassert itself, we could soon see the price trend in USD/CAD resume higher as well. 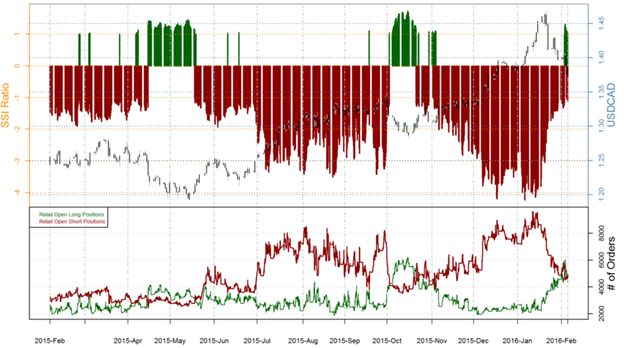