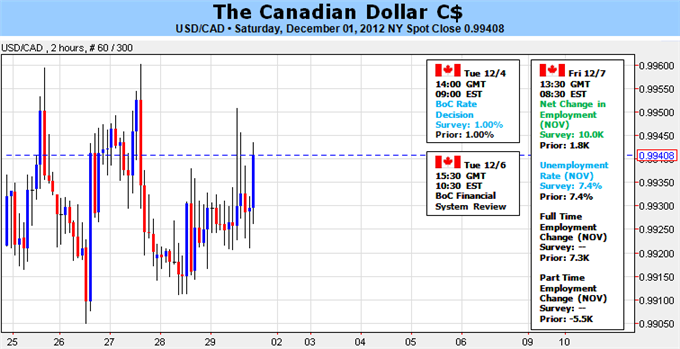 The Canadian Dollar had a mediocre week, finishing in the middle of the majors covered by DailyFX Research, while slipping by a mere -0.09% against the US Dollar and by -0.20% against the Euro, the top performer. The Loonie was the strongest commodity currency on the other hand, gaining +0.08% against the New Zealand Dollar and by +0.26% against the Australian Dollar. Overall, this was a very interesting week for the Canadian Dollar, with some key data coming in slightly weaker than expected, and some big news at the Bank of Canada. As we wait to see how these events impact the Loonie over the coming months, we must take a “neutral” bias for the coming week.

The first news on the week that shook Loonie traders was the announcement that Governor Mark Carney would be leaving the BoC in July 2013, only to join the Bank of England when current Governor Mervyn King leaves. The initial reaction to this news was interesting: the British Pound rallied while the Canadian Dollar fell; or the GBP/CAD appreciated. More or less, this is all about Governor Carney: he was instrumental in keeping the Canadian banking system as well as the economy safe during the 2007-2009 financial crisis that engulfed most of the world’s developed economies. Considering the swath of banking issues facing the United Kingdom, the regulatory burdens that are being undertaken by the BoE (Governor Carney is the head of the Financial Stability Board, an international regulatory group), and the fact that Canadian inflation has been around half the rate of its British equivalent for most of the year, Governor Carney seems like the obvious fit.

The big impact on the BoC will be, of course, who will take over the reins, now that Governor Carney is leaving. While the search process is still in its very infantile stages, the beginning of the end of Governor Carney’s term comes on Tuesday, when the BoC meets for its monthly policy meeting on Tuesday. According to a Bloomberg News survey, the BoC will keep its key rate on hold at 1.00%, and the Credit Suisse Overnight Index Swaps are only pricing in +14.5-basis points over the next 12-months; interest rate expectations are low indeed. It is unlikely that this meeting has a material impact on the Canadian Dollar.

The only data that really matters this week is the November labor market reading due out on Friday, especially after the 3Q’12 annualized GDP figure disappointed at +0.6% versus +0.8% expected, from +1.9% in 2Q’12. Consensus forecasts show that the Canadian Unemployment Rate was on hold at 7.4% in November, as the economy added +10.0K jobs. If the recent development of the economy adding Full-Time jobs and losing Part-Time jobs becomes a trend, the Canadian labor market would look considerably stronger and the prospects for a stronger Canadian Dollar would become elevated. But with the Loonie trading sideways this past week, and no good reason to be any semblance of bullish until Friday, we choose a “neutral” rating going forward. - CV