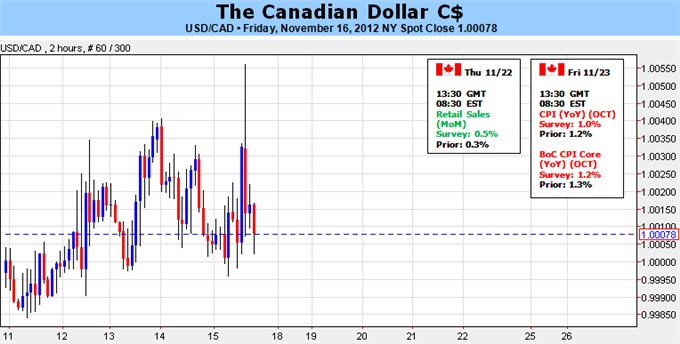 The Canadian dollar weakened against its U.S. counterpart, with the USD/CAD pushing back above parity, and the Loonie may face additional headwinds in the week ahead as the economic docket dampens market expectations for higher borrowing costs. Although Canada retail sales are projected to increase another 0.5% in September, the consumer price report may dampen the Bank of Canada’s (BoC) scope to normalize monetary policy as price pressures diminish.

As the headline and core reading for consumer prices are expected to slow in October, BoC Deputy Governor Agathe Cote anticipates inflation to hold below the 2% target until the end of 2013, and we may see the central bank continue to endorse a neutral policy stance over the near to medium-term as the fundamental outlook for the region remains clouded with high uncertainty. After pushing back plans to balance the federal budget, Finance Minister Jim Flaherty held a cautious outlook for the region amid the ‘economic shocks that ripple outwards from other nations,’ and warned that Canada ‘is not immune to global forces’ amid the tepid recovery in the United States – Canada’s largest trading partner.

Given the historical ties between the two economies, BoC Governor Mark Carney many not want to get too ahead of the Federal Reserve as Chairman Ben Bernanke keeps the door open to conduct more quantitative easing, and we should see Mr. Carney preserve the 1.00% benchmark interest rate for most of 2013 in an effort to encourage a sustainable recovery. According to Credit Suisse overnight index swaps, market participants see the BoC keeping borrowing costs on hold over the next 12-months, and easing bets for a rate hike may continue to dampen the appeal of the Loonie as investors weigh the prospects for future policy.

As the rebound from 0.9632 gathers pace, the USD/CAD appears to be carving out an bullish trend, and we may see the pair continue to retrace the decline from June as the developments coming out of Canada curb bets for a rate hike. However, as the relative strength index on the USD/CAD remains capped by the 67 figure, the divergence in the oscillator certainly foreshadows a short-term correction in the index, and the pair may track sideways during the holiday trade before we see another bullish move in the exchange. - DS