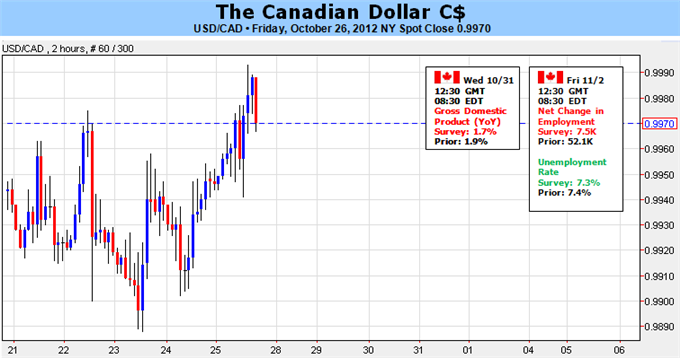 The Canadian dollar continued to weaken against its U.S. counterpart as the Bank of Canada softened its tone for a rate hike, but the loonie may regain its footing going into November as the economic docket is expected to instill an improved outlook for the world’s 10th largest economy. Indeed, the central bank reiterated that ‘some modest withdrawal of monetary policy stimulus will likely be required’ after keeping the benchmark interest rate at 1.00%, but continued to highlight the ‘imbalances in the household sector’ as the record-expansion in private sector credit ‘remains the biggest domestic risk’ for the region.

Although the BoC expects the economy to return to full-capacity by the end of 2012, the monetary policy report argued that ‘the level of housing investment still remains near historical highs,’ and the BoC may increase its effort to stem the record-rise in household indebtedness in order to address the heightening threat for an asset bubble. However, BoC Governor Mark Carney warned that a rake hike looks ‘less imminent’ amid the slowdown in global growth, and the central bank head may strike a more neutral tone over the coming months as the region remains vulnerable to external shocks. According to Credit Suisse overnight index swaps, the BoC is widely expected to keep the benchmark interest rate on hold at the December 4 meeting, while market participants see the central bank maintaining its current policy stand over the next 12-months in an effort to further shield the economy. Nevertheless, as the October employment report highlights the biggest event risk for the Canadian dollar, a large pickup in job growth may fuel speculation for higher borrowing costs, and we may see the loonie regain its footing against its major counterparts as the economic recovery in Canada gradually gathers pace.

In contrast, the technical outlook casts a bullish outlook for the USDCAD as the pair breaks out of the downward trending channel carried over from June, and the dollar-loonie may track higher in the week ahead as the relative strength index clears resistance around the 58 figure. The USDCAD appears to be carving out a bullish trend amid the series of higher highs paired with higher lows following the rebound in September, and we would need to see a break and a close above the 200-Day SMA (0.992) to foster a more meaningful move to the upside. - DS