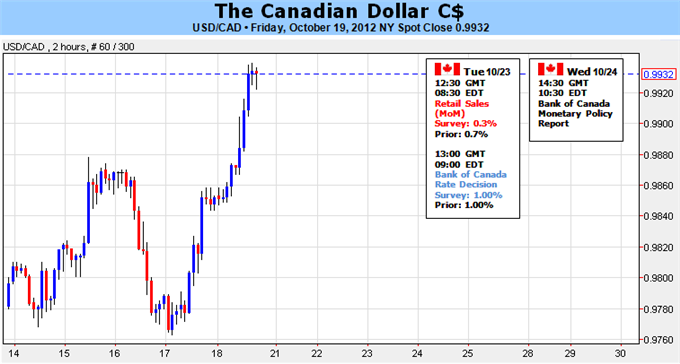 The Canadian dollar struggled to hold its ground against its U.S. counterpart, with the USDCAD advancing to a fresh monthly high of 0.9939, and the loonie may face additional headwinds in the days ahead should the Bank of Canada soften its tone to raise the benchmark interest rate from 1.00%. Although the BoC is widely expected to maintain its current policy next week, the fresh batch of central bank rhetoric may dampen the appeal of the loonie as the government sees a slowing recovery in the region.

Indeed, Finance Minister Jim Flaherty warned that the government may reduce its growth forecast as it prepares to release its updated budget, and we may see BoC Governor Mark Carney follow suit amid the ongoing slack in the real economy. As price growth holds near the lowest level since 2010, the central bank should sound more dovish time this around, and Mr. Carney may no longer see scope to withdraw monetary stimulus as growth and inflation tapers off. In turn, the BoC may strike a more neutral tone for monetary policy, and the protracted recovery in the United States – Canada’s largest trading partner – may keep the BoC on the sidelines given the historical ties between the two economies. According to Credit Suisse overnight index swaps, market participants see the central bank keeping the benchmark interest rate on hold over the next 12-months, and Governor Carney may look to carry the wait-and-see approach into the following year in an effort to further shield the world’s 10th largest economy from external shocks.

As the relative strength index on the USDCAD finally clears interim resistance around the 58 figure, the upside break in the oscillator should pave the way for a higher exchange rate, but the pair may come up against trendline resistance as it maintains the descending channel from June. Nevertheless, should the BoC talk down speculation for a rate hike, the shift in the policy outlook may threaten the bearish trend in the USDCAD, and we will look for a close above the 200-Day SMA (0.9996) to encourage a bullish forecast for the dollar-loonie. – DS