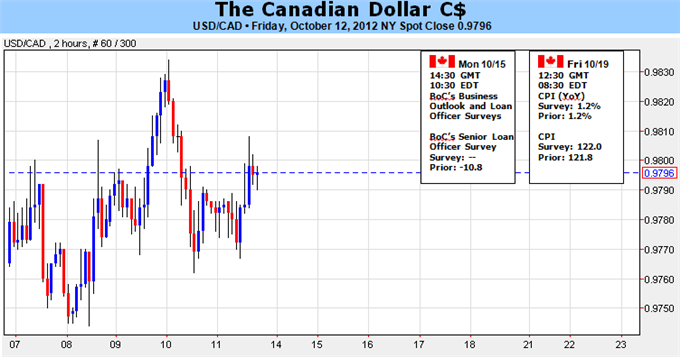 The Canadian dollar lost ground against its U.S. counterpart despite the positive developments coming out of the world’s tenth-largest economy, but the recent decline in the loonie may be short-lived as market participants maintain bets for a Bank of Canada rate hike. As the economic docket for the following week is expected to show a rebound in private sector consumption paired with an uptick in the headline reading for inflation, a slew of positive developments is likely to increase the appeal of the Canadian dollar, and the loonie may regain its footing in the days ahead as the data fuel speculation for higher borrowing costs.

However, according to Credit Suisse overnight index swaps, investors still see the benchmark interest rate being held at 1.00% over the next 12-months, and the BoC may scale back its willingness to start withdrawing monetary support as the International Monetary Fund curbs its forecast for global growth. At the same time, the protracted recovery in the United States – Canada’s largest trading partner – may keep the central bank of the sidelines as the Fed maintains a dovish tone for monetary policy, and Governor Mark Carney may move alongside its U.S. counterpart given the historic ties between the two economies. As the central bank head is scheduled to speak on the global economy next week, we may see Mr. Carney may adopt a more dovish tone for monetary policy, and the BoC may strike a more neutral tone at the next meeting on tap for October 23 amid the slowdown in world growth.

As the USDCAD makes another failed attempt to put in a close above the 50-Day SMA (0.9839), the downward trend in the moving averages instills a bearish outlook for the pair, and the loonie may regain its footing against its U.S. counterpart should the fundamental developments coming out next week heighten expectations for a rate hike. However, dovish remarks from Governor Carney may spark a bearish reaction in the Canadian dollar, and we may see a more meaningful rebound in the USDCAD as market participants scale back bets for higher borrowing costs. - DS