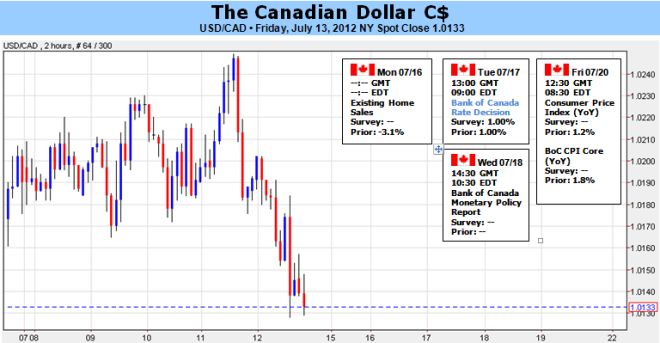 The Canadian dollar gained ground against its U.S. counterpart amid the rebound in risk sentiment, but the loonie may struggle to hold its ground next week should the Bank of Canada strike a cautious outlook for the region. The BoC interest rate decision highlights the biggest event risk for the following week as Governor Mark Carney talks up speculation for higher borrowing costs, but market participants may continue to scale back bets for a rate hike as the sovereign debt crisis continues to pose a threat to the region.

Indeed, Governor Carney made numerous attempts to talk down the record rise in household indebtedness, and we may see the central bank head continue to float the idea for a potential rate hike amid fears of a housing bubble. Although we’re seeing bright spots across the Canadian economy, the BoC faces limited scope to normalize monetary policy amid the ongoing turmoil in Europe. As a result, we may see the central bank carry its wait-and-see approach into 2013. In a Bloomberg News survey, all of the 22 economists polled forecast the BoC to hold the interest rate at 1.00%, while market participants see the central bank sticking to its wait-and-see approach over the next 12-months according to Credit Suisse overnight index swaps.

At the same time, we will be closely watching the quarterly monetary policy report due out on July 18 as the central bank will present its updated forecast for growth and inflation, and the report my highlight a weakened outlook for the region as the U.S. – Canada’s largest trading partner – faces a slowing recovery. In turn, the fresh batch of central bank rhetoric may dampen the appeal on the Canadian dollar, but the Consumer Price report on tap for Friday may renew speculation for higher borrowing costs as the core rate of inflation is expected to expand at fastest pace for 2012.

As the USDCAD continues to hold above the 78.6% Fibonacci retracement from the 2007 low to the 2009 high around 1.0100-10, we may see the pair continue to build a short-term base around the key figure, and the technical outlook instills a bullish bias for the dollar-loonie as the relative strength index breaks out of the downward trend. In turn, a slew of dovish comments from the BoC may trigger another run at 1.0400, and we may see fresh 2012 highs in the exchange rate as it carves out a higher low in July. - DS