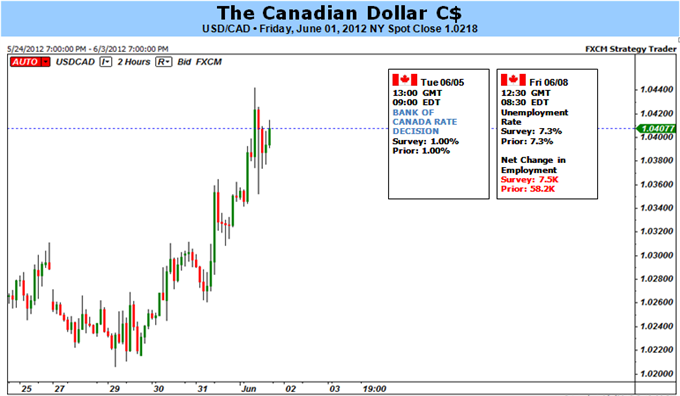 The Canadian dollar is off by nearly 1% at the close of trade this week with the USD/CAD advancing to levels not seen since November as falling crude prices and a weaker-than-expected GDP report weighed heavily on the loonie. Key economic data next week and continued weakness in commodity prices are likely to limit advances in the loonie in the near-term as all eyes turn to Tuesday’s Bank of Canada interest rate decision.

Looking ahead to next week, investors will be closely eyeing data out of Canada with building permits, housing starts, and employment data on tap. Over the past two years, the Canadian economy has averaged 193.35K housing starts per month. Over this same time frame, economists have forecasted gains averaging 188.32K; that’s to say that, on average, the Canadian housing market is surprising to the upside by 3.74%. Data over the past six months have been even more impressive, with housing starts averaging 208.72K against forecasts predicting 197.25K gains – that’s good for additional upside of 5.81%. The housing market continues to beat expectations by a greater margin with each passing month, boding well for Canadian consumers down the line. Policymakers have expressed some concern over the potential housing bubble in recent weeks, but we find that these concerns are overblown with more or a risk coming from the record household debt burdens which Governor Mark Carney has cited as the biggest domestic economic risk. Labor market data on Friday will also be closely as the pace of job growth is expected to ease with consensus estimates calling for the addition of just 10K jobs for the month of May, down from a previous gain of 58.2K a month earlier.

The Bank of Canada’s interest rate decision on Tuesday is sure to steal the spotlight however, with the central bank widely expected to hold the benchmark interest rate at 1.00%. The policy rate has remained at 1.00% since September of 2010, marking the longest unchanged period since the 1950s. Last month the BoC cited that a rate hike, “may become necessary” amid consumer-led domestic growth and an improved outlook on the European crisis. However with conditions in Europe continuing to deteriorate and softening Canadian growth prospects, it’s likely that Governor Mark Carney will strike a more dovish tone compared with the April statement. March GDP data released on Friday came in weaker than expected with a print of 1.6% y/y, missing calls for a read of 1.9% y/y with the loonie coming off sharply as expectations for a rate hike diminished. As it stands, Credit Suisse overnight swaps are currently factoring in only a 13% chance of a 25 basis point hike with twelve month expectations calling for another 28 basis points in interest rate hikes. As such, it’s likely that Canadian dollar advances will be limited as the central bank takes a wait-and-see approach for future monetary policy and as sharp declines in crude (one of Canada’s largest exports) continue to weigh on loonie prospects.

From a technical standpoint, the USDCAD closed the week in overbought territory with the daily RSI holding at its highest levels since early October at 75. Key topside resistance remains the November highs just above the 1.05-figure with a pullback of some magnitude likely after advancing eleven of the past fourteen sessions on a breach above the confluence of the 200-day moving average and trendline resistance dating back to the October highs. Note that although the daily relative strength index remains in over-bought territory above 70, the oscillator has yet to test the highs made back in October when the USD/CAD made fresh yearly highs above the 1.06-handle. –MB