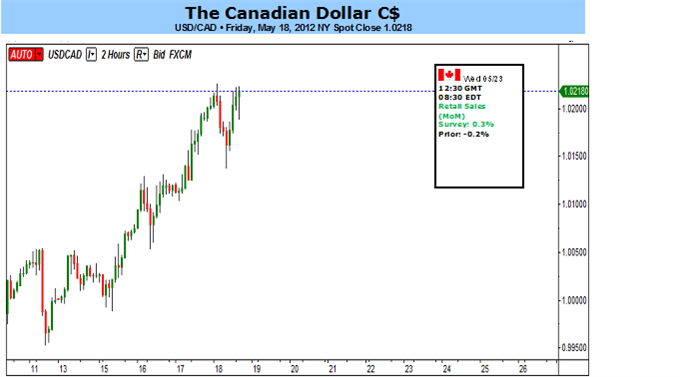 The Canadian Dollar struggled this past week as some disappointing US data alongside a commodities’ liquidation dragged the high beta currency to its lowest level against the US Dollar since January 16. Yet the Canadian Dollar wasn’t the worst performer, and that says a lot in this current risk landscape. In fact, the Canadian Dollar has a lot going for it right now: an improving housing sector; a strengthening labor market; and above all, a hawkish Bank of Canada.

However, given the Euro-zone crisis and the disappointing Chinese growth story, the Loonie, has been susceptible to losses. And herein lays the Loonies’ loony dilemma: is it going to take cues off of its strong fundamental backdrop or the weak global one? Given this, we hold a neutral bias for the Loonie in the periods ahead; but specifically, bullish against the AUD, EUR, GBP, and NZD; and weaker against the JPY and USD.

In terms of data due out in the coming week, Wednesday is the only day will prints set for release. At 12:30 GMT, Leading Indicators for April and Retail Sales for May are due, and on the collective, they are expected to show a stronger Canadian economy. Leading Indicators are expected to show growth of 0.4 percent, but this will represent a slight slowdown from the 0.5 percent reading in March.

On the other hand, Retail Sales are poised to show growth, with a Bloomberg News survey showing a 0.4 percent gain from a 0.2 percent contraction in April. Additionally, when discounting automobile sales, retail sales growth is expected to remain steady at 0.5 percent in May, unchanged from April. Assuming these prints come in at the forecasts, then the Canadian Dollar will be insulated against further declines in an increasingly risk-averse environment.

Amid growing concerns across the globe, rate expectations have fallen a bit from the Loonie, which has contributed to its downfall. Whereas the market was pricing in a 26.8 percent change of a 25.0-basis rate hike on May 11, expectations dipped to 14.0 percent today. However, when we examine the number of basis points being priced into the Canadian Dollar over the next 12-months, the Credit Suisse Overnight Index Swaps show that the Loonie has the most amount of bps being priced in going forward; this is supportive. In an atmosphere in which global growth prospects are being clobbered and the European currencies look vulnerable to the sovereign debt crisis, it is expected that there will be strong demand for safety; but, due to the aforementioned reasons, we believe that the Canadian Dollar should remain resilient, and while facing downside pressure against the Japanese Yen and the US Dollar, it is primed to gain elsewhere. It is for this we are neutral on the Canadian Dollar in the week ahead. –CV