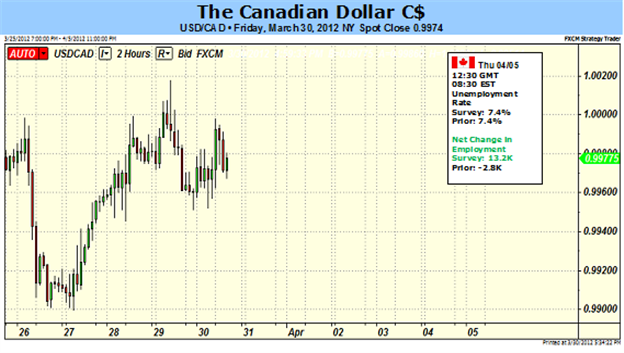 The Canadian dollar was little changed going into April as the USDCAD held the range from earlier this year, and the exchange rate may continue to track sideways next week as market participants weigh the outlook for monetary policy. As Bank of Canada Governor Mark Carney is scheduled to speak on Monday, the fresh batch of commentary is likely to spark increased volatility in the exchange rate, and we may see the central bank head may strike in improved outlook for the region amid the more robust recovery in the U.S. – Canada’s largest trading partner.

Indeed, we may see BoE Governor Carney continue to soften his dovish tone for monetary policy as the risks surrounding the region diminish, and the central bank head may strike an improved outlook for the region as 'recent developments suggest that the outlook for the Canadian economy is marginally improved’ from the beginning of the year. In turn, speculation for a rate hike may resurface as ‘inflation is somewhat firmer than previously anticipated,‘ but we may see Mr. Carney hold a neutral tone throughout the first-half of the year as the economy is expected to operate below full-capacity well into 2013. According to Credit Suisse overnight index swaps, investors are pricing the BoC to maintain the 1.00% interest rate for the next 12-months, and we may see the central bank head continue to endorse a wait-and-see approach in April as the fundamental outlook remains clouded with uncertainties. As the record rise in household debt paired with the marked appreciation in the Canadian dollar remains a key concern for the BoC, the Governor may attempt to talk down the loonie, and we may see the USDCAD threaten the range from earlier this year should the central bank head keep the door open to ease monetary policy further.

As the USDCAD appears to have carved out a bottom in March, the recent advance in the exchange could threaten resistance at 1.0050, and we may see a bullish breakout in the dollar-loonie as the relative strength index maintains the upward trend from earlier this month. At the same time, the recent rhetoric by the Federal Reserve reinforces our bullish call for the USDCAD as the BoC sticks to its neutral policy stance, and the shift in the policy outlook should heavily influence the pair throughout 2012 as we expect the FOMC to conclude its easing cycle this year.-DS