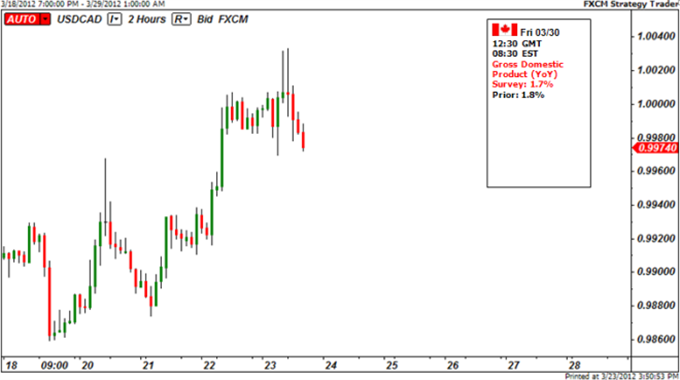 The Canadian Dollar had a poor week, falling by 0.62 percent against the U.S. Dollar and by 1.89 percent against the week’s strongest currency, the Japanese Yen. Its commodity comrades, the Australian and New Zealand Dollars, were down weaker, losing 0.35 percent and 0.03 percent versus the Loonie, respectively. Crude oil didn’t help the Canadian Dollar’s fight, as “black gold” was down 0.17 percent the past five days.

Data this past week was mixed for the Canadian Dollar, though it leaned just enough bearish to drag the commodity currency lower. Leading indicators expanded by 0.6 percent in February, two-tenths of a percent better than the negatively revised January figure at 0.4 percent. Retail sales for January were significantly worse than expected, though the December figure was revised up to 0.0 percent from -0.2 percent. Finally, on Friday, the consumer price index for February was released, and on the back of softer year-over-year figures, the Loonie took a hit. If prices are beginning to fall, it is possible that the Bank of Canada becomes more dovish in its stance to weaken the Loonie in the months ahead; this would, in theory, boost inflationary pressures (seemingly la crème de le crème for contemporary central bankers).

Looking ahead, the event docket features only one data print worth paying attention to, and that comes out on Friday. Ahead of the growth print for February (Canada is unique among major economies in that it releases growth figures each month), it is likely that the Canadian Dollar follows broader risk-trends: if global growth concerns persist, oil could come off further and so too will the Loonie.

With that said, on Friday, monthly growth figures are due, with the January GDP reading forecasted to show modest growth of 0.5 percent. On a year-over-year basis, growth is expected to have gained at the pace. It is worth noting that Canada’s largest trading partner, the United States, has seen a significant improvement in economic data over the past few months, and that could roll over to more imported goods from Canada (I believe this is part of the reason for the projected uptick in Canadian growth).

If there is one thing to take away from this piece, note the rhetoric employed: not much exciting data is due, and there is nothing substantial neither in the rear view mirror nor on the road ahead to keep the Canadian Dollar from depreciating against the U.S. Dollar. Without the further support of global risk trends (which have been deteriorating) the coming week could be rough for the Loonie ahead of Friday’s growth reading. – CV