Canadian Dollar Will Stick to Risk-Trends with Empty Docket 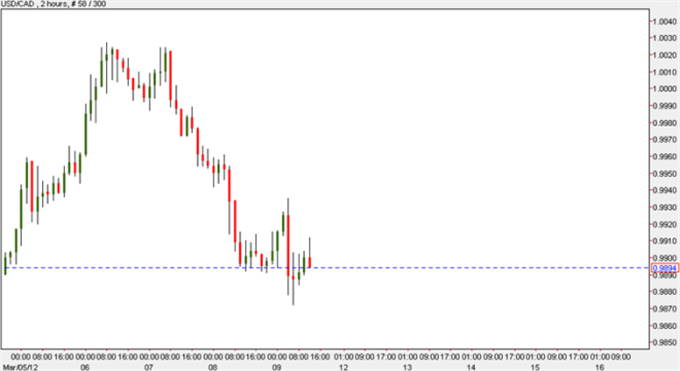 -Loonie Surges as Bank of Canada Holds Rates at 1.00%

From September 1, 2011 to January 31, 2012 the USDCAD held a significant -0.863 correlation with the S&P 500. That is to say, USDCAD weakness was matched by S&P 500 strength (correlation does not indicate causation). From February 1, 2012 to February 29, 2012, this relationship deteriorated to -0.617 as the Canadian Dollar lagged the advance by U.S. equity markets in February. The story has been different in March thus far, with the correlation rising back to -0.932 over the first week-plus. At current market prices, if the USDCAD is to continue to correct towards its implied value given by the S&P 500, the USDCAD could fall towards 0.9804 in the coming periods (holding the S&P 500 constant).

With that said, it is going to take further S&P 500 strength and thus broad appetite for risk in order to keep the Canadian Dollar elevated against the U.S. Dollar. Considering broader risk-trends that developed the past few days – mainly slower growth out of the Asian and Oceanic regions and Greece officially defaulting on its debt – this might be difficult to achieve. While the Canadian economic docket is barren the coming few days, data out of the United States with macroeconomic consequences could influence the Canadian Dollar next week.

We don’t need to look further than Tuesday to find the important events that will drive the USDCAD next week. Early in the North American trading session, the advance retail sales figure for February is due. According to a Bloomberg News survey, sales are expected to have increased by 1.0 percent last month, a modest sign for broad U.S. consumption. This is important to the Canadian Dollar considering Canada is the United States’ largest trading partner. If the U.S. economy exhibits further signs that it continues to grow – consumption represents approximately 70 percent of the U.S. economy (advance retail sales are a proxy to this) – the Canadian Dollar stands to gain on speculation that the effects will reverberate into a stronger Canadian economy (following the bullish Canadian and U.S. labor market reports on Friday, the Loonie was the top performer against the U.S. Dollar).

Later on Tuesday is the Federal Open Market Committee decision. Although rates will remain on hold, any further efforts to talk down the U.S. economy by Federal Reserve Chairman Ben Bernanke could weigh on the Loonie. On the other hand, if the FOMC discusses further monetary easing measures, the Loonie stands to gain as the prospect of future cheap funds will boost speculative flow into commodity-linked currencies such as the Canadian Dollar. – CV