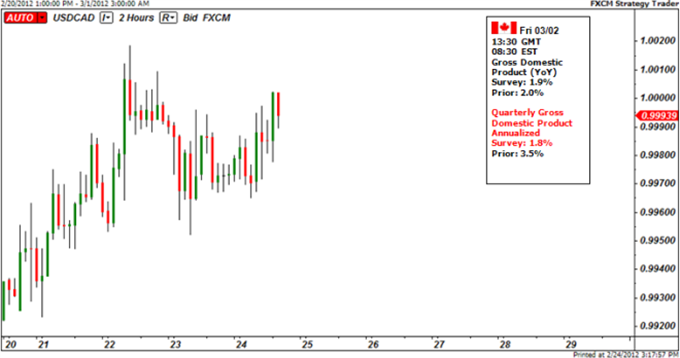 What’s there to say about the recently uninspiring Canadian Dollar? While the European currencies posted strong gains against the U.S. Dollar and oil surged to over $110 per barrel at one point on Friday, the Loonie fell by 0.23 percent against the Greenback. During the first few weeks of the year, the USDCAD and crude oil held a significant -0.538 daily correlation, which suggests higher oil begets a weaker USDCAD, or vice-versa (correlation does not equal causation). Yet this week, with oil gaining 6.21 percent, one would expect to have seen a substantially weaker USDCAD; and as noted earlier, the USDCAD gained.

What could be the reasons for this decoupling? I can point to two reasons for broad Loonie underperformance. First is the change in the United States’ position as an oil consumer. In late-2011, the United States flipped from a net importer of oil to a net exporter of oil. As the United States’ largest trading partner with respect to energy, Canada is thus hurt by the fact that the U.S. is producing more oil than it consumes. I liken this relationship to Australia’s mining sector and China: if Chinese demand for base metals decreases, then the Australian economy and thus the Australian Dollar would weaken.

Despite the recent uptick in data, global growth prospects remain a concern, and I firmly believe that without substantial monetary policy easing by many Western central banks (mainly the European Central Bank and the Federal Reserve), commodities would be trading lower and thus so too would the commodity currencies. Of course, it is worth noting that Iranian saber-rattling has helped propel oil to its elevated price levels, and that too has helped support the commodity currency complex. Any deterioration of global risk trends or signs of easing tensions out of the Middle East will weigh on crude oil, taking away one of the few reasons for the Canadian Dollar to rally. As such, on the back of expected weakening economic data, the Canadian Dollar looks to weaken in the coming periods. – CV