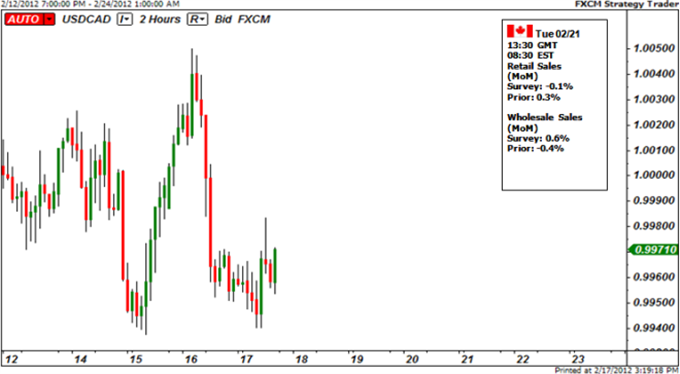 The Canadian dollar gained ground against its U.S. counterpart to maintain the narrow range from earlier this month, but the loonie may come under pressure next week as the economic docket is expected to dampen the outlook for future growth. As private sector consumption helped to lift the economy out of recession, a contraction in retail sales certainly limits the scope for a more robust recovery, and a dismal spending report may spur a bullish breakout in the USD/CAD as the development strengthens the Bank of Canada’s case to keep the benchmark interest rate on hold for a prolonged period of time.

As BoC Governor Mark Carney is scheduled to speak at the U.S. Monetary Policy Forum next week, the central bank head is likely to maintain a balanced tone for monetary policy, but we may see Mr. Carney strike a cautious tone for the economy as the record rise in household debt continues to pose a threat to the real economy. As the BoC tries to discourage private sector borrowing, there certainly little chance of seeing a rate cut this year, and the central bank could be forced to keep the benchmark interest rate at 1.00% throughout 2012 as government officials expect to see a ‘more modest’ recovery in 2012. In turn, Governor Carney may turn a blind eye to the recent uptick in the headline reading for inflation, and we may see the central bank head make an attempt to talk down the Canadian dollar as the persistent strength in the local currency drags on economy activity.

Indeed, it seems as though the USD/CAD is building a base just above the 78.6% Fibonacci retracement from the 2007 low to the 2009 high around 0.9900, and we will be keeping a close eye on the relative strength index as the oscillator continues to move away from oversold territory. In turn, we may finally see a meaningful rebound in the exchange rate, and a close above the 20-Day SMA (0.9994) would strengthen the case for a bullish breakout as the pair appears to be carving out a higher low this month. – DS