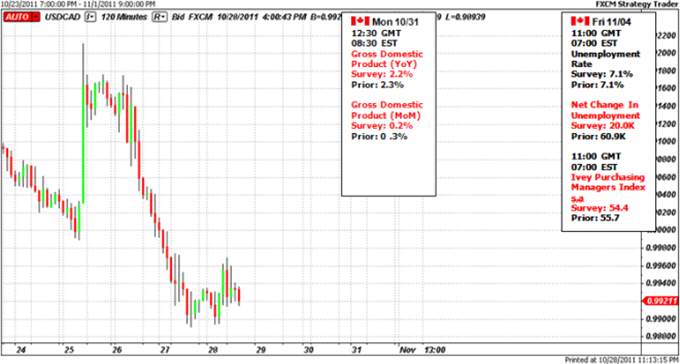 The Canadian Dollar remains intimately anchored to broad-based market sentiment trends, with prices showing a firm correlation to the S&P 500. The benchmark stock index represents investors’ collective priced-in expectations of future earnings of the world’s top companies, and so acts as a proxy for the market-wide outlook on the pace of global economic growth. This speaks directly to Canada’s own performance – which naturally sets the trajectory for its monetary policy and thereby the Canadian Dollar – considering the country is highly sensitive to the worldwide business cycle both as a commodity producer and as a key exporter to the globe’s largest economy, the US.

With this in mind, it is not surprising that the Canadian Dollar surged to the highest in a month last week as investors cheered on the moderation in all three of the major headwinds that had been weighing on economic growth expectations. The threat of an immediate meltdown on the Euro Zone periphery was reduced – at least for now – after an EU leaders’ summit in Brussels concluded with policymakers throwing more money at the problem. Third-quarter US GDP figures showed growth accelerated to the strongest pace in a year, warding off double-dip recession fears. Finally, official commentary from China began to carry subtle hints that monetary tightening was done and credit may even be loosened in pockets of the economy, stoking hopes that a hard landing in the world’s second-largest economy was not to be.

While this paints a rosy picture of the so-called Loonie’s prospects, not all is well. Last week, the Bank of Canada took a decisive turn toward the dovish side of the spectrum, lowering its GDP outlook and conspicuously removing language referencing the unwinding of monetary stimulus in its policy statement. The monthly GDP update to be released on Monday is forecast to show the annual growth rate slowed to 2.2 percent in August, a hair above the 16-month low of 2.1 percent recorded in June, while employment data due Friday is expected to yield a paltry 15,000 jobs increase in October, reinforcing priced-in bets that rates will be at a standstill for the coming year.

On balance, this makes for a clouded outlook for the Canadian currency in the week ahead, with much likely to depend on the deluge of US scheduled event risk packed into the economic calendar. Indeed, October’s manufacturing and service-sector ISM readings, the FOMC policy announcement, and the always closely-watched Nonfarm Payrolls jobs report are all set to cross the wires. Meanwhile, the backdrop will be shaped by an increasingly murky situation on the Euro Zone debt crisis front as initial euphoria fades and investors begin to grumble at the many sweeping assumptions and vague proposals beneath the cheery headlines. While clearly relieved to an extent, investors remain aloof after many false starts on growth and the EU debt issue over the past 2.5-3 years, so last week’s positive news-flow will need to be sustained in order for risk-linked assets including the Canadian Dollar to remain supported.