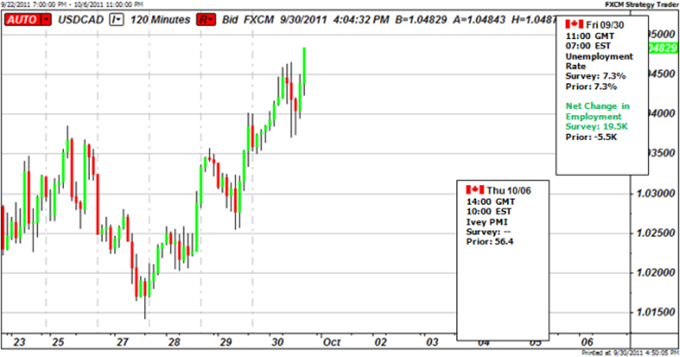 For the second straight week, the Canadian Dollar was one of the worst performing currencies, dropping 2.11 percent against the U.S. Dollar as markets finished their correction that took place at the start of the week. This was expected, as I noted last week that “there could be a small correction in the coming days – typically after such a massive sell-off as we saw the past two days – any rallies should be sold as broader global trends dictate the need for safety, in currencies such as the Japanese Yen or U.S. Dollar.” As such, the Loonie’s late-week decline was in line with that of U.S. equity markets and the other commodity currencies, the Australian Dollar and the New Zealand Dollar. As a risk-correlated asset, any concerns over global growth or sharp deflation weigh on the Canadian Dollar: weak data out of China and the United States weighed on growth prospects this week; and the persistent threat of a Greek default would be a massive deflationary event that would send commodities lower.

Given the data out of Canada this week, one would expect the Canadian Dollar to have performed at least on the better side of the commodity currencies, as there was no particularly discouraging Canadian data. In terms of the headline event for the week, Canadian GDP for July was in line with expectations, showing modest 2.3 percent growth on a year-over-year basis, an encouraging sign given the recent annualized quarterly GDP print. Still, the Canadian Dollar, despite the deteriorating but relatively strong underlying economic fundamentals, tends to move independently of what’s occurring within the world’s eleventh largest nation.

That being said, there is one key report due during the first week of October – and the quarter – that should be given attention, as it could determine the speed at which the Loonie decelerates against the other major currencies. On Friday, labor market data is due, and early forecasts look promising. While the unemployment rate is forecasted to have held steady at 7.3 percent, the economy appears to have added 15.0K jobs in September. The figure isn’t extraordinary, but compared to recent figure posted by the United States, at least the Canadian labor market appears to be adding jobs and keeping unemployment contained.

As I noted last week, and I will continue to hold going forward, “regardless of the data, the Canadian Dollar, as a risk-correlated asset, being bid higher when market participants seek higher yield, stands to lose in the periods ahead.” Similarly, as data out of Canada is sparse to start the quarter, the bias remains that “any rallies should be sold as broader global trends dictate the need for safety, in currencies such as the Japanese Yen or U.S. Dollar.” –CV