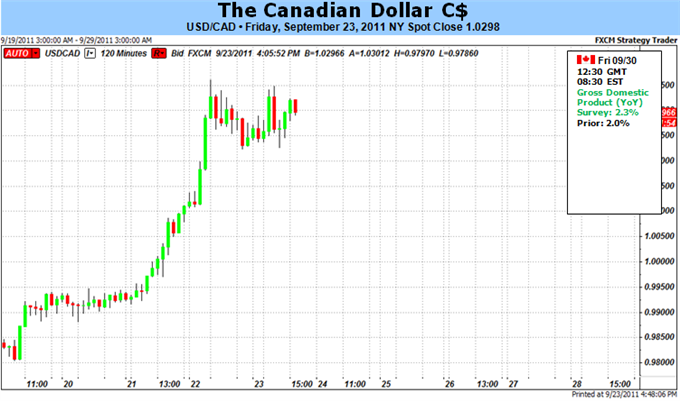 Canadian Dollar Decline Could Slow in Near-term, But Far from Over

The Canadian Dollar had a particularly rough week, finishing down 4.86 percent against the U.S. Dollar, amid the drastic shift to risk-aversion on Thursday and Friday. The Loonie’s decline was in line with that of U.S. equity markets and the other commodity currencies, the Australian Dollar and the New Zealand Dollar, as expected given the currency’s significant correlation. As a risk-correlated asset tied to the commodity complex, any concerns over global growth or sharp deflation weigh on the Canadian Dollar: weak data out of China and the United States weighed on growth prospects this week; and a Greek default would be a massive deflationary event.

Given the data out of Canada this week, one would expect the Canadian Dollar to have risen against the safe haven assets. The consumer price index released on Wednesday showed that price pressures in the world’s eleventh largest economy expanded ballooned to 3.1 percent in August, on a year-over-year basis. This was well-above July’s reading of 2.7 percent, and similarly above the 2.9 percent forecast, according to a Bloomberg News survey.

Typically, higher inflationary pressures boost interest rate expectations, so the faster-than-expected rate-of-acceleration normally would have lured speculators into betting on a higher return in the future for the Loonie. Broader macroeconomic trends are moving currencies at this point, so economic data matters little at this point.

The week ahead, Canada has only one key event on the docket, although it is the monthly gross domestic product print. Canadian growth has tailed-off substantially recently, with the second quarter annualized reading showing a 0.4 percent contraction. That was a significant decline from the 3.6 percent annualized rate in the first quarter. The negative growth is expected to be trimmed in the next release, when the monthly figure from July is forecast to show 0.3 percent growth on a monthly basis, while the yearly figure is forecasted to print at 2.3 percent, according to a Bloomberg News survey.

Global growth is slowing, and Canada, despite their economy which has been relatively insulated from the sovereign debt crisis in Europe, is not immune to such a contraction. Similarly, with oil falling off a cliff in recent weeks on concerns of a global slowdown, the Canadian Dollar has been negatively impacted. Canada is the number one exporter of oil to the United States, the world’s largest consumer of oil, and thus any concerns over American growth substantially weigh on the Canadian economy.

Regardless of the data, the Canadian Dollar, as a risk-correlated asset, being bid higher when market participants seek higher yield, stands to lose in the periods ahead. While there could be a small correction in the coming days – typically after such a massive sell-off as we saw the past two days – any rallies should be sold as broader global trends dictate the need for safety, in currencies such as the Japanese Yen or U.S. Dollar. –CV