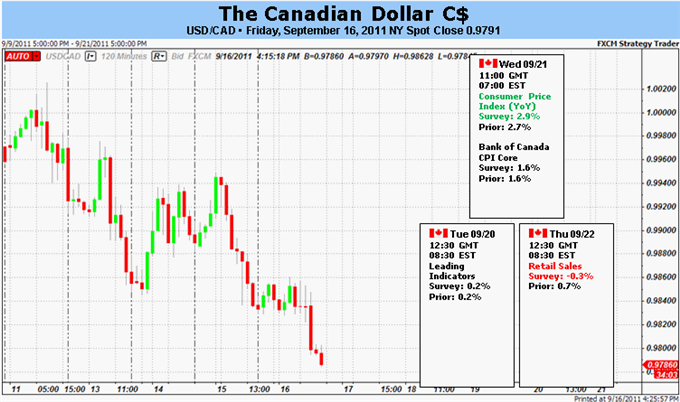 The Canadian Dollar remains intimately tied to the broad trends in investors’ risk appetite, with prices continuing to show a strong correlation with the S&P 500. In fact, the relationship goes beyond USDCAD, with a trade-weighted index of the Canadian unit’s average value against its leading counterparts likewise showing a significant relationship with the benchmark equity index. On balance, this means the outlook for the currency rests squarely on the outcome of the Federal Reserve monetary policy announcement due on Wednesday, with background factors including the continued evolution of the Euro Zone debt crisis and Augusts’ inflation report.

Sizing up expectations for the Fed, it seems increasingly likely that Ben Bernanke and company will not unveil another round of quantitative easing (so-called “QE3”). It appears that the decision in August to establish a firm time frame qualifying the familiar pledge to keep interest rates low for an “extended period” as being at least through mid-2013 was a deliberate chance in strategy away from unconventional policy tools. Indeed, a compelling explanation for the failure of the two previous QE efforts to trickle down past the financial markets and into the broad economy is the scheme’s novelty. Businesses didn’t have a good bearing on the policy’s implications and so shaping expectations about the near- to medium-term credit environment – an absolute essential for firms making plans at least several years forward – became very difficult and undermined QE’s transmission mechanism. The new approach aims to resolve this issue by offering fixed parameters for a familiar variable (the benchmark interest rate) with a long-enough window of opportunity to relieve uncertainty and give corporate America a chance to plan and capitalize.

While the approach is sensible and ought to prove reasonably helpful for the overall economy, the financial markets that had so relished cheap QE-funded money as fuel for speculative bets across the asset classes will be disappointed. Indeed, until the new policy begins to prove itself, a lack of aggressive action from the Fed is likely to stoke risk aversion as it becomes increasingly apparent that the central bank will not do materially more through bond purchases. Needless to say, this is likely to rekindle selling across the spectrum of sentiment-sensitive assets, sending the Canadian Dollar broadly lower.

Besides the FOMC announcement, lingering concerns about sovereign risk in the Euro Zone remain an important driver of risk trends and thereby the Loonie. EU Finance Ministers continue to meet in Poland over the weekend, but early signs point to a lack of progress. The final outcome of the sit-down will help shape the tone for sentiment at the onset of the trading week while bond auctions from Spain, France and Portugal promise to keep sovereign risk concerns close to the spotlight. Finally, Canadian CPI figures are due to cross the wires, with expectations calling for the annual inflation rate to rebound to 2.9 percent in August after hitting a five-month low (2.7 percent) in the previous month. Keeping in mind that prices peaked at 3.7 percent as recently as May without prodding action from the BOC, the outcome ought to pass by with little fanfare.