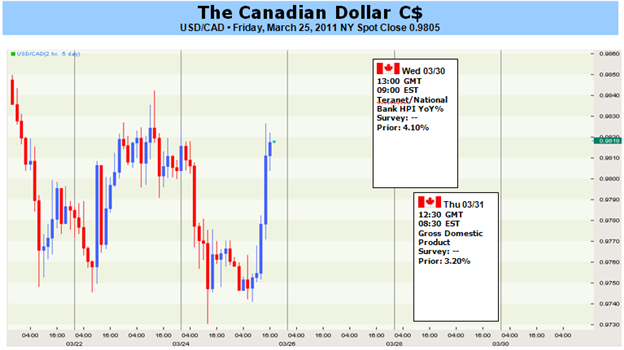 The Canadian dollar, follow the trend higher against the Greenback like its fellow commodity currencies, gained 0.4 percent against its American counterpart over the past week. Traders seemingly ignored heated geopolitical tensions in the Middle East and North Africa, as well as a significantly worse Japanese nuclear crisis, by sending funds into risky assets. The Loonie was mostly higher all week, but stumbled on Friday as liberal opposition ousted the conservative government, and crude oil, the nation’s biggest export, slipped from a near-two week high.

The biggest news on the week has to be the toppling of Stephen Harper’s conservative government, which was under increasing pressure over the past few weeks as Canada faces an increasingly worse debt situation. With elections tentatively scheduled for as soon as May, pressure is increasing for the conservative party to begin fixing the budget deficit, which is arguably the only road block to higher growth figures for Canada: it is the only advanced economy to have regained all of the jobs it lost during the recession. Harper, following the no-confidence vote, said that the Canadian economy remains his top priority, as the global recovery remains “fragile.” Canadian dollar strength, which had been building for some time, may now be limited over the next few weeks amid political uncertainty.

Event risk is light ahead for the Canadian dollar, with relatively insignificant data due at the start of the week. Also, the Teranet/National House Price Index is due on Tuesday, which gained 4.1 percent in December, on a year-over-year basis. On a monthly basis, the HPI is expected to have increased by 0.1 percent in January. The index is a simple measure of dwellings that have been sold at least twice; moderate growth is considered positive for the economy. Finally, the most significant data for the week comes on Thursday, with the release of Canadian growth figures for January. Canada, despite facing steep debt issues coming into 2011, as well as a strong Canadian dollar relative to its U.S. counterpart, is expected to show relatively strong figures on a month-over-month and year-over-year basis, and is expected to show that the economy grew at 0.5 percent in January from December, and 3.1 percent from a year earlier. However, considering the components of growth are well-documented before the release of the aggregate number, the price action sparked onto Loonie-crosses could be limited.

Should struggles continue in the MeNa region, a boost in the price of oil may prop up the Canadian dollar in the following week, but with limited significant data on the horizon, any volatility sparked in the USD/CAD pair will have to come from the Greenback side of the trade. -CV