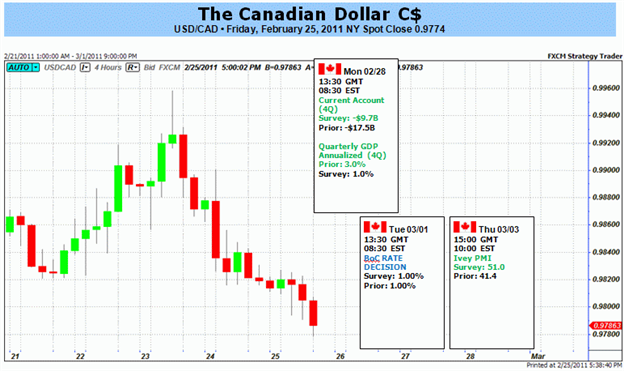 Canadian Dollar Due For Correction as Interest Rate Expectations Rise

Canadian Dollar Due For Correction as Interest Rate Expectations Rise

The Canadian Dollar finished the week slightly stronger against the Greenback, rallying on the surge in oil prices amid turmoil in the Middle East and North Africa; in fact, the USD/CAD pair has a -0.574 correlation with light crude oil. Data was sparse this week, though the one major event was still influential. Surprisingly, Retail Sales dropped in December, falling 0.2 percent from the month prior. However, stripped of automobile sales, Retail Sales increased by 0.6 percent, a figure in line with expectations, which sent the Loonie higher for the remainder of the session. With the Loonie falling slightly away from parity against its U.S. counterpart, key releases this week could dictate whether or not the USD/CAD pair tests similar levels once again.

While the week is packed with significant market moving data from nearly all of the G-7 economies, the Bank of Canada rate decision marks the second central bank meeting on Tuesday, which will be a driving force behind volatility for the North American session after its release at 13:30 GMT. Overnight Index Swaps price in a 4.0 percent chance of a 25 bps move at the meeting on Tuesday, but the markets will be paying close attention to the ensuing commentary as to learn the sentiment of the Governing Council. With inflationary pressures rising in Canada, with the Consumer Price Index increasing by 2.3 percent year-over-year in January, the markets have priced in a 79 bps increase over the next 12-months. Despite the fact that the key interest rate is suggested to hold at 1.00 percent, with an implied overnight interest rate of 1.32 percent for March, Governor Mark Carney’s statement will be particularly important as to learn when the Governing Council believes an actual rate hike will occur. Accordingly, hawkish commentary by Governor Carney could send the Loonie higher against the Dollar.

Before the rate decision on Tuesday, Gross Domestic Product data will hit the newswires on Monday. Growth during the fourth quarter of 2010 is forecasted to increase by 3.0 percent at an annualized rate, in line with moderate growth expectations. However, should the reading come in higher than expectations, expect speculators to drive down the USD/CAD pair amid projected hawkish commentary by Bank of Canada policymakers. With key technical indicators suggesting that the Canadian Dollar should rally after its recent losses, key fundamental data early in the week could be the trigger the Loonie needs to move back towards parity against the Greenback. - CV