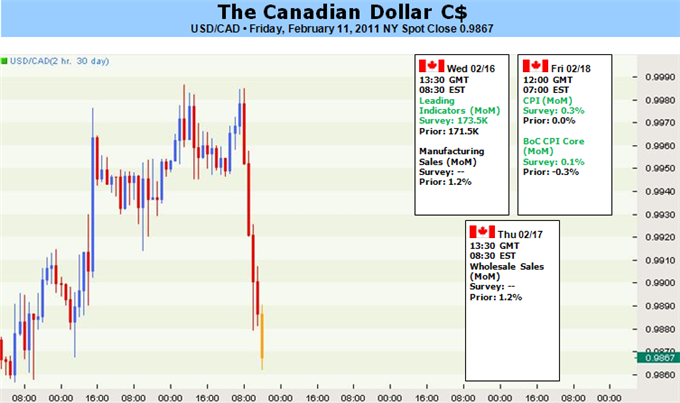 Canadian Dollar Set for a Tumble to Start the Week

Canadian Dollar Set for a Tumble to Start the Week

In an fundamental vacuum, the fact that the Canadian dollar enjoyed its most aggressive run in over two months this past Friday would mean the currency is well positioned to ride off momentum into the week ahead. However, there are problems with that simplistic assessment. Considering the initial move was heavily influenced by speculative momentum; it is reasonable to assume that investor sentiment will determine how the market opens Monday. It just so happens that with the aggressive move from the loonie, USDCAD has found itself at the floor of a six-week range. More importantly, the economic docket is light on catalysts through the start of the week; and the performance of the currency generally contradicts the risk-aversion lean the rest of the FX market seems to be taking. Without active encouragement, pressure will build for a natural correction of this past Friday’s aggressive drive.

Looking beyond the opening hours of sessions of trading for the week, the loonie will find itself jostled heavily by fundamental activity from both external and internal sources. Looking to exogenous factors first, there is event-risk on the docket of the type that can actually alter the course of risk appetite for the entire financial markets. Should the S&P 500 or carry currencies topple; the Canadian dollar will very likely be dragged down along with investor optimism by virtue of its classification as a commodity currency. That said, the Canadian currency can also play the foil of its primary benchmark: the US dollar. A true shift in sentiment is not exactly necessary to generate the necessary activity for our focus currency; should cross fundamental winds spur the greenback higher, the loonie subsequently suffer. Another exogenous factor to keep an eye on (though this too has its roots in risk appetite trends) is the strength of the energy market. A relief reaction to Egypt’s president stepping down could make for an unfavorable commodity link.

As for the tangible and predictable economic docket, there is more than enough event risk to work with. After that surprise surge in the trade balance – the sharpest since 1982 – there will be an increased sensitivity for data. That said, it will be difficult to capatilize on the end-of-the-week drive without a meaningful event scheduled for the first 48 hours of trading. Starting Wednesday, a broad growth assessment will be cast a capital flows report, manufacturing sales figures and Leading Indicators Index all scheduled for release. Those truly interested in the Canadian dollar’s standings though will be more interested in Friday’s event risk – the January consumer-level inflation data. The headline and core annual readings aren’t expected to change from their previous prints (at 2.4 and 1.5 percent respectively); but that is hearty enough to keep rate hike expectations churning. It should be said that interest rate expectations (pricing in 83 bps of rate hikes in 12 months) are at their highest levels since July. - JK