The Australian Dollar had moments of volatility created by domestic data during the week but overall, it remained hostage to global events.

As anticipated, the RBA raised the cash rate target by 50 basis points to 2.35% on Tuesday, the fourth hike of that magnitude and the fifth move overall since lift-off began in May. The proceeding monetary policy statement failed to reveal anything we didn’t already know.

Later in the week, at a speech for the Anika Foundation, Reserve Bank of Australia Governor Phillip Lowe hinted that future rate rises may not be as aggressive going forward.

He said, “we recognise that, all else equal, the case for a slower pace of increase in interest rates becomes stronger as the level of the cash rate rises.”

The comment was seen as being less hawkish and this saw the yield on the 3-year Australian Commonwealth government (ACG) bond dip to 3.11% from 3.26% just prior. The Aussie was undermined at the same time, but they both recovered in the aftermath.

GDP and trade data painted a mixed picture with 2Q quarter-on-quarter GDP in line with forecasts at0.9% and against the previous 0.8%, that has been revised down to 0.7%.

The disappointing export numbers appear to reflect the impacts of the slowdown in China as their zero-case Covid-19 policy continues to see significant parts of the country in lockdown.

On Friday, Chinese inflation data divulged a decrease in price pressures with August year-on-year CPI at 2.5% instead of 2.8% expected and PPI way below forecasts of 3.2%, coming in at 2.3%.

The upside to these soft numbers is that they allow the government there to ramp up stimulatory measures. Although it should be noted that previous attempts have thus far failed.

Iron ore prices are reflecting the situation in China and a pick-up in growth doesn’t seem apparent anytime soon.

Ongoing weakness in Australia commodity exports could undermine the Aussie in the near term. Combined with the RBA becoming less hawkish than their developed market peers, the AUD/USD may come under pressure.

US Dollar gyrations look to be the driver for AUD/USD as shown when compared to EUR/USD price movements. While there have been moments of independent movement, the global picture seems to reflect the key for the Aussie going forward.

With that in mind, US CPI and PPI on Tuesday and Wednesday respectively this week could be pivotal for the Australian Dollar.

AUD/USD AND EUR/USD OVER THE WEEK 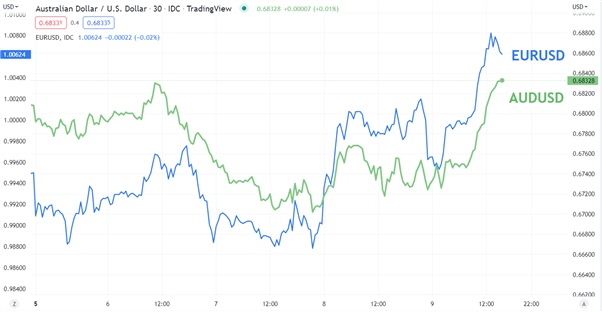