The Australian Dollar made a 2-year low against the US Dollar in May as global central banks jockeyed for position in the fight on inflation.

The monetary policy tightening cycle pivoted dramatically in the second quarter toward a far more aggressive stance from both the Reserve Bank of Australia (RBA) and the Federal Reserve, among others. Notable exceptions from contracting monetary conditions are the Bank of Japan (BoJ) and the Peoples Bank of China (PBOC).

Going into the third quarter, the latest year-on-year headline CPI for the US is 8.6% and 5.1% for Australia.

The response from the Fed was to go toward a jumbo hike of 75 basis points at their last Federal Open Market Committee (FOMC) meeting. The RBA also added an outsized rate rise of 50 basis points in June. The language coming from both camps is that further hikes of a similar size are on the cards.

The above highlights the differences and the consequent acceleration in US Dollar appreciation more broadly. USD/JPY for instance, is at a 24-year high, illustrating the markets focus on policy disparities.

AUD/USD remains vulnerable to swings in perceptions on where interest rates are headed. RBA Governor Philip Lowe recently stated that Australians should prepare for a potential cash rate of 2.5% later this year, when they expect inflation to reach 7%. With the cash rate at 0.85%, this implies at least one more lift of 50 basis points.

Inflation Is the Focus

A key driver of any addition or subtraction to the RBA’s cash rate guidance is CPI. Second quarter CPI is building up to be a pivotal data point and it will be delivered 27th July. Dr Lowe has made it very clear in recent public comments that the rate of change in inflation will be the emphasis in shaping policy.

The RBA have consistently spoken of the rate of change in CPI as being a crucial factor in determining monetary policy changes. While the RBA monetary policy meeting in early July appears likely to deliver a 50 bp lift, the CPI number later that month will tell the market if another 50 bp hike in August is coming or not.

The importance of this CPI number for future guidance on rate rises cannot be overstated. The consequences for AUD/USD will flow from this data point. The Federal Reserve saw US inflation accelerating at an alarming pace going into the end of 2021 and were too slow to act. Inflation in the US has never fallen by 2% or more without a recession.

Despite what President Biden et al might like to happen, any astute observer finds it difficult to see US inflation getting back toward the Fed’s target of 2% without a recession.

The Fed are now paying a dear price for inaction. The RBA have said all the right things to avoid such a disastrous situation, but the economy will judge them on their actions.

In the background, commodity market volatility hums along. The Russian invasion of Ukraine underpins Australian exports, while China’s approach to managing Covid-19 undermines them. Net-net, circa AUD 10 billion is still being added each month to Australia’s bottom line via trade.

Rolling into the third quarter, the Australian economy is in the best shape it has been in for generations. This gives the RBA plenty of scope for outsized rate hikes. For now, the market is focused on the rate hike path for AUD/USD. If you have read to this part of the article, mark 27th July in your calendar. 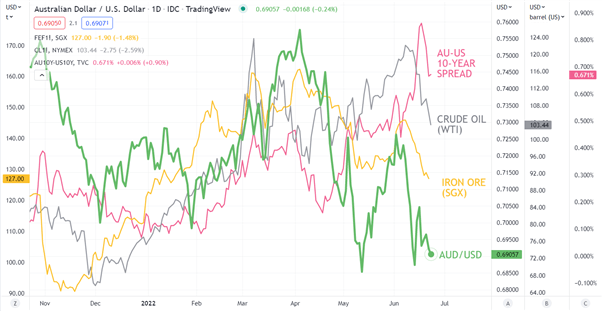