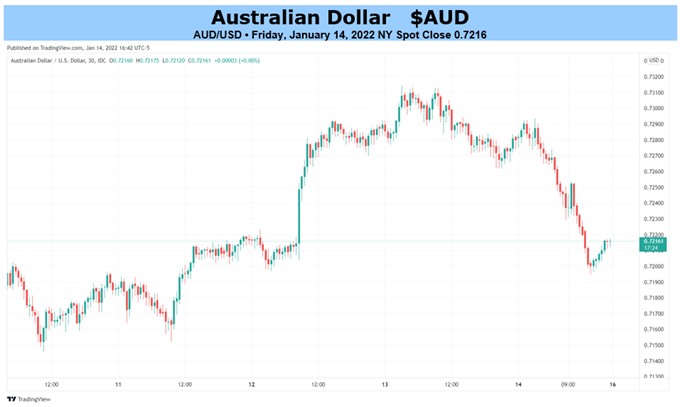 The Australian Dollar rallied hard this week as the US Dollar plummeted against most currencies and assets. The outlook for the AUD/USD might be US Dollar dependent, but Chinese growth and the upcoming reporting of their GDP might play a role.

The US Dollar index (DXY) made a 2-month low, and commodities appreciated across the board as the Dollar weakened.

USD initially went lower this week after headline US CPI printed as expected at 7% year-on-year to the end of December. There had been some speculation of a higher number that would have lent itself to Fed tightening policy harder than current projections.

After the CPI data, Federal Reserve Chair Jerome Powell spoke in front of the Senate Banking Committee in his confirmation hearing. Under questioning, he reiterated the Fed is committed to bringing down inflation.

This hawkishness saw front-end Treasury yields edge up and back-end yields ease off, as the market started to price in lower inflation expectations in the long run.

However, the market had got in front of itself, as it was then positioned for an ever-accelerating tightening process from the Fed. When it was clear that the current pricing of hikes was about right, the US Dollar became vulnerable.

Chinese trade data, released on Friday, showed imports were down but exports were surging through December to record a better expected trade surplus of USD 94.46 billion instead of USD 73.95 anticipated.

The robust trade balance has the potential to roll into a strong Chinese GDP number due for release at the beginning of the week. The market is expecting a fourth quarter year-on-year number of 3.3% against 4.9% previously. Given that the Omicron variant of Covid-19 was not widely spread until late in the quarter, a solid number is possible.

Australian unemployment data is also out on Thursday and the market is anticipating 60k jobs were added in December, notably lower than the strong November read of 366k. This would give an unemployment rate of 4.5%, below 4.6% prior.

However, for now the future path of the Australian Dollar appears to be beholden to US Dollar movements.

The Federal Reserve is not due to meet until late in the month. Until then, Fed speakers will be monitored closely for any deviation from the current mantra. 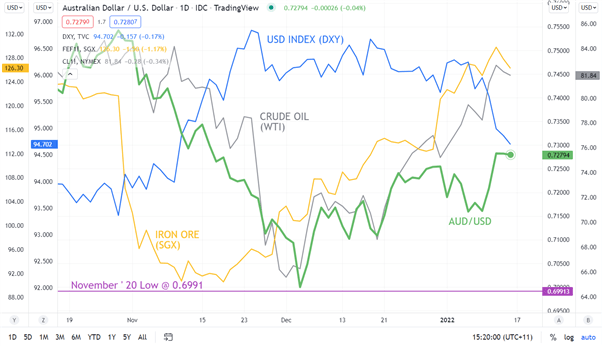