The sentiment-linked Australian Dollar aimed cautiously higher this past week. But on the whole, it remains unchanged against the US Dollar since the beginning of this year. The Aussie’s consolidative dynamic for the past four months could be explained by a couple of opposing fundamental forces. These may continue persisting in the week ahead.

Aussie Dollar traders ought to keep an eye on how Reserve Bank of Australia (RBA) policy expectations develop relative to overall market sentiment. On one hand, a steady climb for the bellwether Dow Jones stock index has reflected an upswell in risk appetite, offering support to the sentiment-linked currency. On the other hand, the markets have been maintaining a relatively dovish outlook for the RBA.

On the chart below, market-implied odds of an RBA rate move by May 2022 have slowly deteriorated since March. This is compared to what occurred in January and February, where there was a cautious unwinding of dovish expectations. Last week’s disappointing first-quarter Australian inflation data did not help. The annual trimmed mean core CPI reading weakened to 1.1%, the lowest since 1983.

So while market sentiment has been improving, dovish RBA policy expectations have been increasing. This is probably part of why AUD/USD has been struggling to find meaningful direction. With that in mind, the Australian Dollar will probably focus the local central bank’s policy announcement in the week ahead. It is widely anticipated to maintain benchmark lending rates and the 3-year bond yield target unchanged at 0.1%.

But, Governor Philip Lowe and company have been leaving the door open to an extension of quantitative easing, saying that data and the CPI outlook could decide a shift of the yield curve control target to the November 2024 government bond. Last week’s soft CPI data may have fueled these expectations. Such an outcome could pressure the currency lower. Still, last week’s dovish Federal Reserve policy announcement may maintain the rosy outlook for stocks.

On balance, this could be another relatively quiet period ahead for the Australian Dollar. One-week implied volatility readings for AUD/USD, via options from Bloomberg, have been steadily declining since early March. At one point, readings touched their lowest since February 2020 earlier in April. Still, arguably the biggest risk for the Aussie remains a material downturn in sentiment that suddenly revives risk aversion. 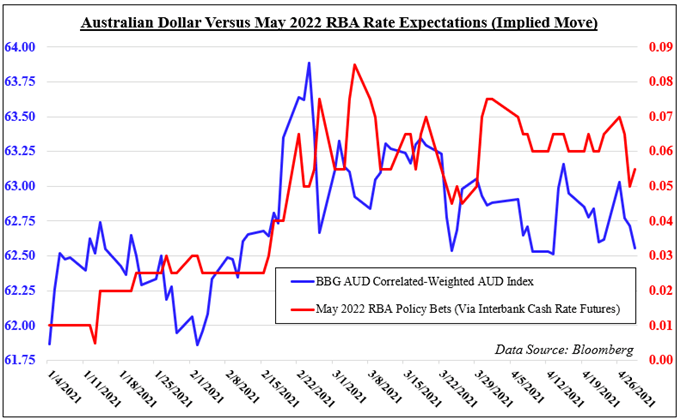