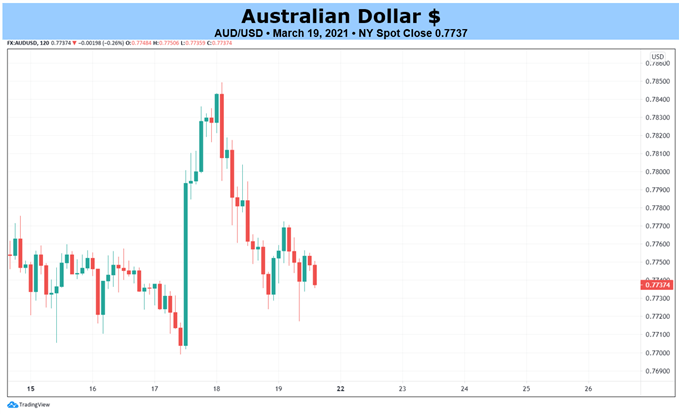 The Australian Dollar turned lower at the end of the week, undercutting the promising three-day start as the calendar turned through the ides of March. But not all AUD-crosses are created equal, leading to disparate weekly stats (even if weakness was largely pronounced on Thursday and Friday). Both GBP/AUD and EUR/AUD still closed the week lower by -0.22% each, while AUD/JPY dropped by -0.37% and AUD/USD fell by -0.21%.

With more volatility coming into play for both global bond yields and equity markets, the Australian Dollar may have a choppy end of the month – more or less in line with its seasonal tendency.

The last week of March brings about a quieter economic calendar for the Australian Dollar. Indeed, the only set of data paying attention to are the preliminary March Australian PMI reports, set to be released on Tuesday, March 23 at 18 GMT. The context is of a weaker trend among recent releases: the Citi Economic Surprise Index for Australia, a time-decay measure of data momentum, closed the week at +16.9, down from its monthly high of +49.2 on March 4, now sitting at its lowest level since March 2 at +7.9.

Few sovereign bond markets have experienced more turmoil in 2021 than Australian government bonds. Against the backdrop of the Reserve Bank of Australia’s promise to keep rates low through March 2023, ‘bond vigilantes’ have been testing the mettle of policymakers to stick to the course. For now, it appears they are. RBA Governor Philip Lowe said that the RBA would continue along its current path until its employment and inflation goals were met. 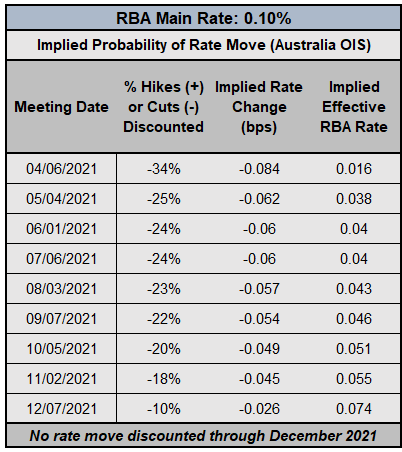 Accordingly, rates markets remain tame enough – for now – to suggest that the RBA will be keeping rates unchanged for at least this year. Even after a round of comments from RBA Assistant Governor Christopher Kent this past week that more or less eliminated any lingering hope for a cut to negative rates, Australian overnight index swaps continue to price in a 34% chance of a 25-bps rate cut. Amid a quiet slate for RBA policymakers ahead, rates markets will be free of any pushback for the final week of March. 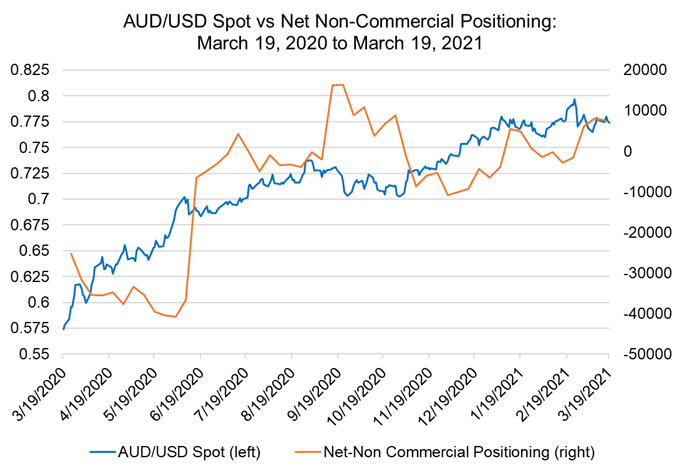 Finally, looking at positioning, according to the CFTC’s COT for the week ended March 16, speculators slightly decreased their net-long Australian Dollar positions to 7,620 contracts, down from 8,075 contracts held in the week prior. Australian Dollar positioning has been net-long for three consecutive weeks, and oscillating between relatively tame net-short and net-long positions since July 2020.