AUD/USD attempts to retrace the decline following the Federal Reserve’s first meeting for 2021 as it bounce back from a fresh monthly low (0.7592), and the Reserve Bank of Australia (RBA) interest rate decision may fuel a larger rebound in the exchange rate if the central bank retains the current course for monetary policy.

The RBA may follow a similar approach after announcing plans to purchase “$100 billion of government bonds of maturities of around 5 to 10 years over the next six months” in November, and the central bank may rely on its current measures to support the economy as the “2020-21 Budget commits further response and recovery support, bringing the Government's overall support to $507 billion, including $257 billion in direct economic support.”

In turn, the RBA may stick to the same script as the minutes from the December meeting emphasize that “the Board's policy measures had lowered interest rates across the yield curve, which was assisting the recovery,” and Governor Philip Lowe and Co. may largely endorse a wait-and-see approach for monetary policy as “members agreed to keep the size of the bond purchase program under review.” 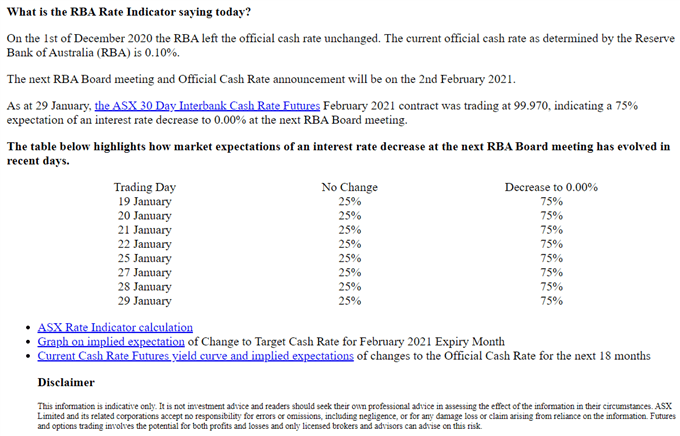 However, the ASX 30 Day Interbank Cash Rate Futures reflect a greater than 70% probability for a RBA rate cut as “the Board is prepared to do more if necessary,” and an unexpected reduction in the official cash rate (OCR) may undermine the recent rebound in AUD/USD as Governor Lowe and Co. continue to push monetary policy into uncharted territory.

With that said, more of the same from the RBA may trigger a bullish reaction in the Australian Dollar amid speculation for a rate cut, and the pullback from the monthly high (0.7820) may turn out to be an exhaustion in the bullish trend rather than a change in AUD/USD behavior like the price action seen in the second half of 2020.