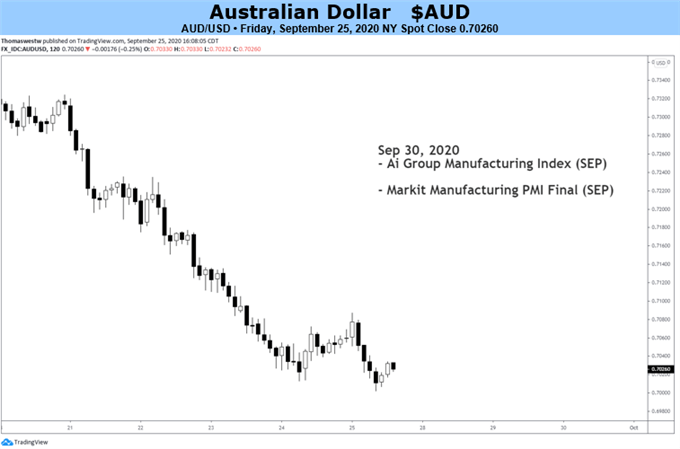 The Australian Dollar is at risk of extending its retreat from the yearly high set on September 1 ahead of the Reserve Bank of Australia’s interest rate decision on October 6, despite the planned easing of coronavirus restrictions in Melbourne – Australia’s second largest city.

Melbourne Transitioning to Next Stage of Reopening Roadmap may Underpin AUD

With the 14-day rolling average of Covid-19 infections falling to 25.1 and the virus growth rate drifting below 0.5, Melbourne is poised to move to the second stage of Victorian Premier Dan Andrews’ “reopening roadmap” on September 27.

However, Andrews warned that “Sunday will not be a day of massive steps [and] is not a day when we essentially throw the doors open”, adding that instead it will be a series of “steady and safe steps” to ensure that there is a “gradual and continued decline in these numbers”.

Although the next phase of the roadmap is unlikely to see a return to normalcy in Australia’s second largest city, the consistent decline in infections combined with the gradual easing of restrictions could underpin the Australian Dollar against its major counterparts in the near term. 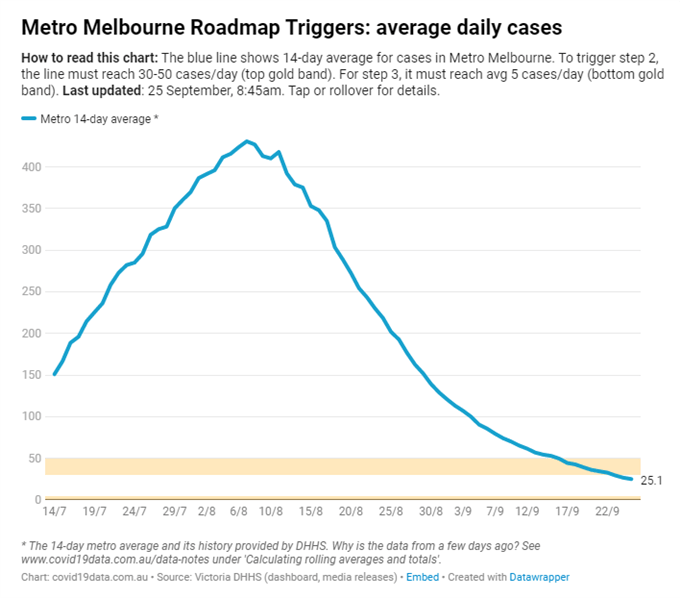 Having said that, recent comments from the Reserve Bank of Australia’s Deputy Governor Guy Debelle appear to suggest that the central bank could ease monetary policy settings further in October “given the outlook for inflation and employment is not consistent with the Bank’s objectives over the period ahead”.

Debelle listed several policy options that “the Board continues to assess” which included adjusting the central bank’s current bond purchasing scheme to supplement the “three-year yield target” and potentially lowering the “current structure of rates in the economy a little more without going into negative territory”.

This suggests that the RBA could be considering cutting the Official Cash Rate (OCR) from 0.25% to 0.1% and potentially introducing “a program of government bond purchases beyond that required to achieve the 3-year yield target”. In fact, it seems the market has taken heed of the Deputy Governor’s comments, with futures markets pricing in a 72% chance that the central bank cuts the OCR to 0% in October.

Nevertheless, there is a distinct possibility that the market could be getting ahead of itself given Governor Phillip Lowe has previously questioned the benefit of easing rates by a miniscule 15 basis points and the Australian Government is scheduled to announce its budget for 2020-2021 on the same day as the RBA rate decision.

Moreover, with Treasurer Josh Frydenberg announcing the simplification of the responsible lending laws imposed in the wake of the 2008 global financial crisis, to ensure that “there are no unnecessary barriers to the flow of credit to households and small businesses”, the need for further monetary stimulus may not be as dire as previously thought.

To that end, the upcoming manufacturing PMI release for September and retail sales data for August could dictate the near-term outlook for AUD, with better-than-expected results probably easing rate-cut bets and in turn underpinning the local currency.