The Australian Dollar’s over 30% rally from the yearly low can be attributed to three main driving factors; the Reserve Bank of Australia’s stance on negative interest rate policy, climbing commodity prices and relatively successful health outcomes in comparison to other developed economies.

However, a sustained surge of Covid-19 infections in Victoria, Australia’s second most populous state, and growing clusters in New South Wales and Queensland threaten to halt the risk-sensitive currency’s trot to fresh yearly highs.

With the state of Victoria recording a staggering 723 cases on July 30, Premier Daniel Andrews is almost certain to extend current stage-three restrictions beyond the proposed 6-week timeline as “the steps we’ve taken are not enough” to suppress the highly infectious coronavirus. 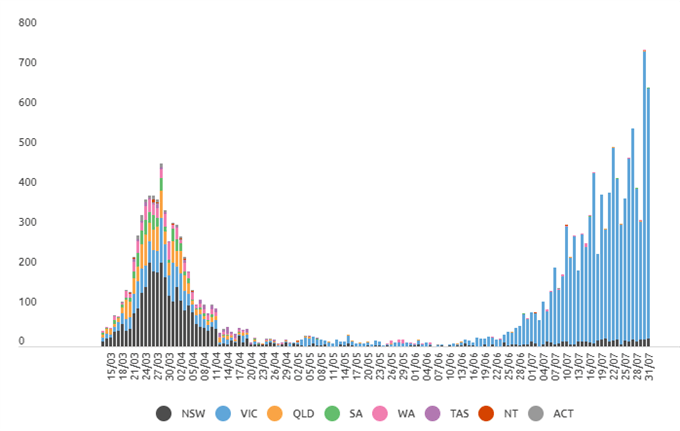 Stressing that there is no possibility of “economic recovery unless and until we get these numbers down” Andrews, and Chief Health Officer Brett Sutton, are contemplating the possible imposition of “New Zealand-style” lockdown measures as “nothing is off the table” after moving to make mask-wearing mandatory on July 19.

Considering current restrictions are estimated to cost the local government $1 billion a week, an extension of stage-three measures may drag on the performance of regional risk assets in the weeks to come. With the imposition of ‘New Zealand-style’ restrictions likely fueling a period of significant risk aversion.

Moreover, the RBA agreed “there is no case for intervention in the foreign exchange market, given its limited effectiveness when the exchange rate is broadly aligned with its fundamental determinants, as at present”, with Assistant Governor Chris Kent stating that the Reserve Bank is “not overly concerned” by the recent strength seen in the Australian Dollar.

Despite a weakening fundamental backdrop Governor Philip Lowe and the committee are expected to keep the official cash rate steady at 0.25% as the conclusion of the discussions “at the July Board meeting was that the best course of action is to maintain the mid-March package and to continue to monitor the effects of the pandemic on the economy.

To that end, the RBA’s wait-and-see approach may continue to buoy the risk-associated Australian Dollar against its major counterparts with the central bank essentially taking the shackles off the currency, assuring market participants that the central bank is “not planning any alternative policies at present”.

As a commodity-linked currency, it comes as no surprise that the GSCI commodity index’s 50% rally from the yearly low has largely coincided with the Australian Dollar’s recovery from the March extremes.

However, the GSCI index has struggled to break above the sentiment-defining 200-day moving average (343.10) in recent days, suggesting commodity prices may be due a short-term pullback.

Should that eventuate, the trade-sensitive AUD could lose ground against its major counterparts.

On the other hand, a daily close above breakaway gap resistance (346.8) may coincide with an extension of the Australian Dollar’s climb to multi-year highs against the haven-associated US Dollar. 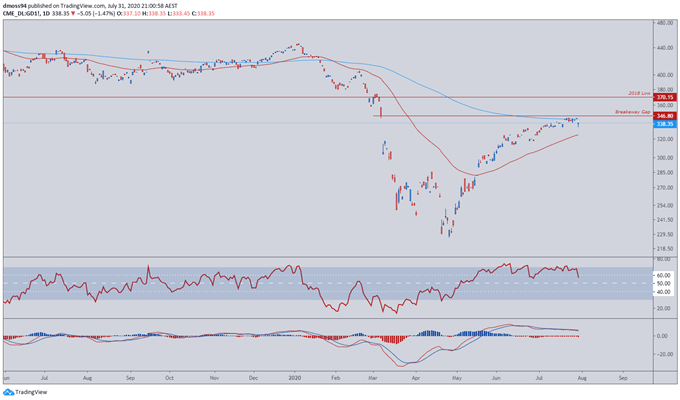