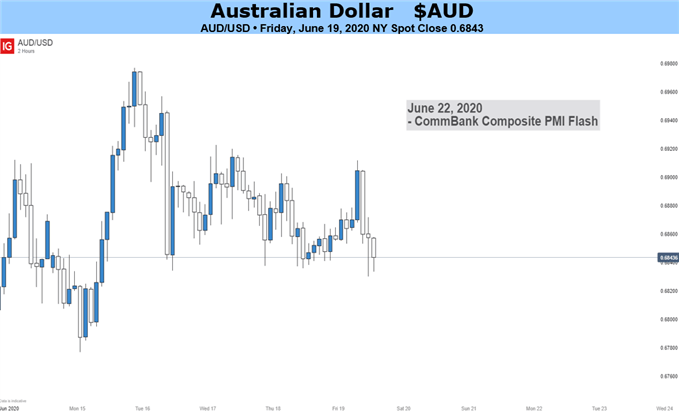 Second Wave of Covid-19 May Dash Hopes of Speedy Recovery

The Australian Dollar may face heightened liquidation pressure if concerns about a second wave of coronavirus cases compels government officials to reinstitute or extend growth-hampering lockdown policies. With the United States as the newest epicenter – though Brazil has been catching up – a slower-than-planned reopening could undermine economic activity in the world’s largest economy.

Consequently, a chilling effect may subsequently ripple out and dampen appetite for cycle-sensitive currencies like AUD. Its commodity-linked nature makes its particularly vulnerable to oscillations in global sentiment, particularly during a time of almost-unprecedented uncertainty. However, even more worrisome are coronavirus-related trends sprouting in China: Australia’s largest trading partner.

In response to a flare-up of coronavirus cases in Beijing, government officials have increased restrictions on domestic travel to avoid having the virus spread to other cities and provinces. Deputy secretary-general of the Beijing municipal governmentChen Bei said both inbound and outbound travelers will be required to undergo several tests to ensure the safety of local residents.

While the first outbreak occurred at a wet market in Wuhan, officials have traced the second outbreak to Xinfadi, a wholesale food centre southwest of Beijing. Already reports are showing more infections in the area surrounding Xinfadi. This lends credence to the notion that the prospect of another shutdown – while not as severe as the first – may be implemented again and could further dampen regional growth prospects.

For the past few months, Australia-China relations have been deteriorating, but the additional strain from the Covid-19 outbreak has added another layer to growing intra-regional hostilities. Beijing was angered after Australian officials pushed for an international investigation into the origins of the coronavirus pandemic. A particular sore point was a call for greater transparency in how the government handled the initial outbreak.

In response, Chinese officials announced a ban on the importation of meat from four key slaughterhouses and then went on to impose tariffs on other products, like barley. Additionally, the China's ambassador to Canberra, the Cheng Jingye, threatened a boycott of tourists and students from visiting Australia. The Asian giant is Australia’s largest trading partner, so naturally a weaker trade relationship there could hurt AUD.

Since bottoming out in March, the Australian Dollar – analyzing it through the use of Bloomberg’s Correlation-Weighted Currency Index – has recovered against a broad basket of other currencies. However, recent trends across a wide range of FX indicate that AUD may fall. Given the fundamental circumstances, a bearish outlook in these uncertain times is not outlandish to possess.