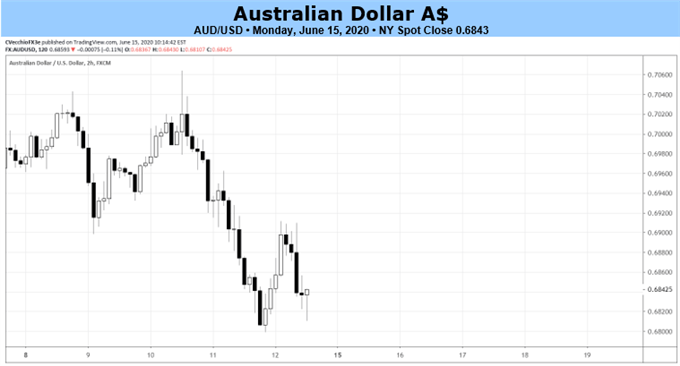 The Australian Dollar’s terrific run of late may be facing its first real test in weeks. Failure to extend its rally amid a sharp recalibration of risk appetite has led the antipodean currency to just its third weekly loss since bottoming during the third week of March. Losses in AUD/JPY (-3.44%) and AUD/USD (-1.45%) rates were meaningful, and even pairs like EUR/AUD (+1.15%) and GBP/AUD (+0.45%), considerable losers in recent weeks, were able to post gains.

Now that fears of a slow restart from The Great Lockdown are beginning to intensify – that the United States and other developed economies may experience a second wave of the coronavirus pandemic – the abrupt shift in risk appetite threatens to weigh on the Australian Dollar through the ides of June.

The coming week ahead offers only a handful of meaningful data releases for the Australian Dollar. On Tuesday, June 16, the June RBA meeting minutes will be released, providing more color to the rate decision that ultimately left policies unchanged. Given the forward guidance provided by the RBA (more below), it is possible the that RBA minutes don’t leave much of an impression on price action. On Wednesday, the May Westpac Leading Index for Australia will be released, with the latest reading showing the economy in its worst shape since the 2008-2009 Great Recession.

On the encouraging side, on Thursday, the May Australian jobs report will show that the economy has been handling the coronavirus pandemic better than some of its developed country counterparts. The Australian unemployment rate is set to rise to 7% from 6.2% on the back of another 125,000 jobs lost (from 594,300 lost in April); but comparatively, say, to Canada or the United States, both of which are reeling from double digit unemployment, the situation down under isn’t that bad at all. 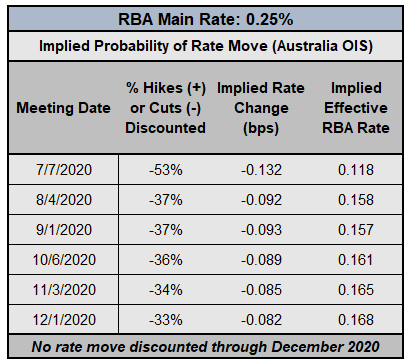 According to Australia overnight index swaps, there is a 53% chance of a 25-bps rate cut at the July RBA meeting. But given the commentary from RBA Governor Lowe suggests that the central bank is not prepared to move rates into negative territory, making any further rate cuts unlikely; the pricing may be a quirk due to the shape of the Australian bond yield curve.

To this end, the RBA has said that it will target the three-year bond yield at 0.25% - the same rate as the overnight cash rate – which is a reasonable assumption that the RBA will keeping its overnight cash rate at 0.25% or lower for at least the next three years. Like its antipodean counterpart, lower rates may be coming soon for the RBA – just not quite yet. 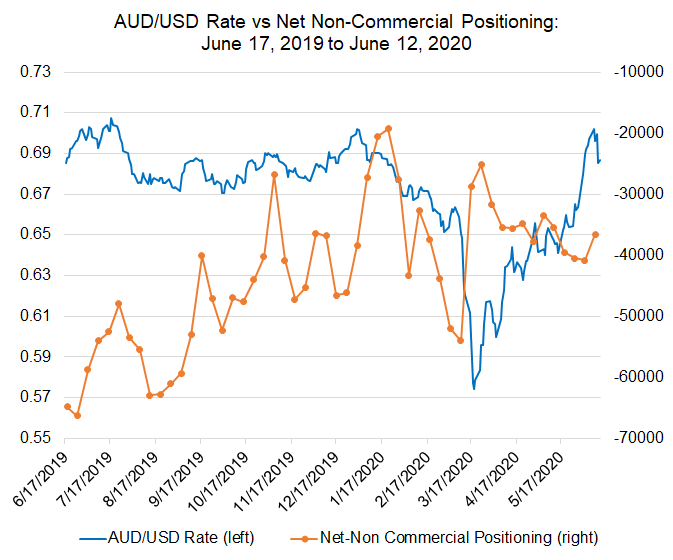 Finally, looking at positioning, according to the CFTC’s COT for the week ended June 9, speculators decreased their net-short Australian Dollar positions to 36.6K contracts, down from the 40.8K net-short contracts held in the week prior.

Net-short Australian Dollar positioning has, on balance, increased during the AUD/USD rate rally since the end of March: during the week ending March 27, there were 28.8K net-shorts held. While this resiliency is impressive, it is also worth noting that the one-year high watermark for net-shorts held is 66.3K, leaving plenty of room in both directions for either a short covering rally or a retrenchment in short positioning.