AUD/USD Rallies to Yearly Open Ahead of FOMC Rate Decision

It’s safe to say the Australian Dollar had a breakout week, exploding through the February highs and pushing back above the psychologically imposing 0.70-handle for the first time since the 1st of January. Benefiting from the weakness seen in the US Dollar over the past week of trade, the AUD soared as much as 5% from the monthly open (0.6656).

Although the “Australian economy is experiencing the biggest economic contraction since the 1930s,” Reserve Bank of Australia (RBA) Governor Philip Lowe believes it’s “possible that the depth of the downturn will be less than earlier expected”. However, with GDP contracting 0.3% in the first half of 2020, Australia looks to be heading for its first recession since 1991.

As household consumption falls to the lowest reading since the fourth quarter of 2008 (-1.1%) it is evident that without the fiscal support provided from the Australian government, through the JobKeeper and JobSeeker initiatives, GDP would have registered a contraction of 0.7%. With these initiatives set to expire in September, and households contributing over 50% to GDP, the return of consumer spending and confidence will be pivotal to an economic recovery. 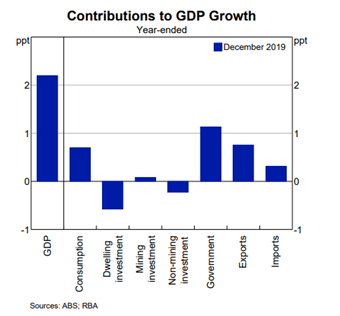 Trade may become a contentious issue in the coming week as the Morrison government continues to aggravate Beijing through the implementation of new foreign investment laws. With Australia one of the more China-dependent economies in the world, a breakdown in this pivotal relationship could be disastrous. Retaliation from Beijing could threaten the recent surge in AUD with the implementation of further tariffs on Australian agricultural and mining products, possibly reversing the ground gained by the risk-sensitive asset.

Looking forward, the absence of meaningful local data brings attention to the Federal Reserve monetary policy announcement and press conference on the 11th of June. With expectations that Chairman Jerome Powell and his committee will keep the cash rate steady at 0.25% investor focus will turn to the forward guidance delivered by the US central bank. 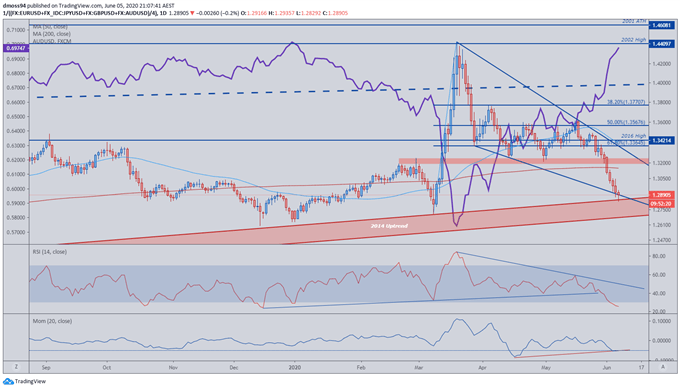 The US Dollar’s decline to three-month lows has seen the Relative Strength Index (RSI) slide into oversold territory for the first time this year. Collapsing through the 200-day moving average earlier in the month invigorated sellers as they forced price back to a supportive zone extending from the 2014 low.

Price reaction at trend support suggests that the Greenback may be attempting to carve out the monthly low, as it remains contained within a bullish Falling Wedge chart pattern. RSI could provide an early indication of intent, with a push back above 30 possibly leading to USD clawing back lost ground against its Australian counterpart.