RBA Governor Philip Lowe’stestimony to the Senate Select Committee on COVID-19 praised the performance of the central bank’s mid-March emergency package and its assistance in ‘building the necessary bridge to the recovery’.

The success of ‘flattening-the-curve’ of COVID-19 infections in Australia has led to ‘national health outcomes better than earlier feared’ and may result in an ‘economic downturn not as severe as earlier thought’. Outlining that the path for recovery will be dependent on ‘how quickly confidence can be restored’ the Governor may be pleased by the record rebound of the Westpac Consumer Sentiment Index in May (88.1), after falling to the lowest levels recorded on the 47-year old gauge in April (75.6).

Fiscal support through the JobKeeper & JobSeeker initiatives has helped cushion the blow on the labor force resulting in the unemployment rate for April beating market expectations (8.3%), despite rising to the highest level since late-2015 (6.2%). With the participation rate falling to a 15-year low in April, the smooth re-opening of the economy will be pivotal in defining the next steps for the RBA as the central bank ‘maintains its expansionary settings until progress is being made towards full employment’.

The upbeat tone in the RBA meeting minutes for May pushed the AUD/USD back to pre-crisis levels and this push could continue if local economic data supports the ‘upside scenario’ in which ‘employment growth and spending recover more rapidly’ than established in the RBA’s ‘baseline scenario’.

Headlining the economic docket for next week will be the June 2nd interest rate decision from the RBA, with the expectation that the official cash rate (OCR) will remain at the record low of 0.25%. The forward guidance provided by Governor Lowe will be intently scrutinized and could continue to spur the recent strength seen in the Australian dollar.

The 3rd of June will provide an insight into the effect of economic hibernation on GDP and could confirm recession fears should expectations of a -1.2% Growth Rate eventuate; resulting in Australia’s first quarterly contraction since 1992 (‘The recession we had to have’). 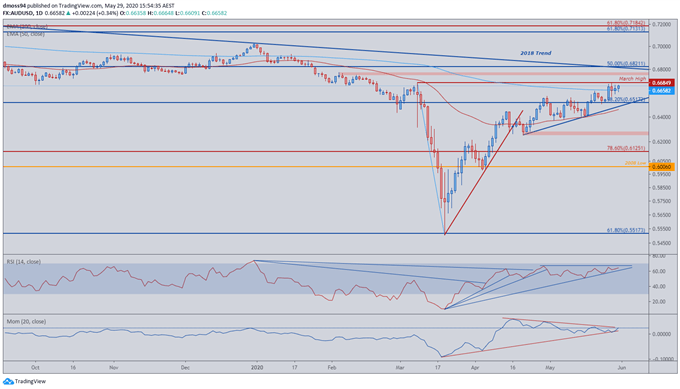 Although prices have moved higher the Relative Strength Index (RSI) hasn’t followed suit, with the oscillator failing to push into overbought territory and possibly signaling a lack of steam in the recent rally.

The reaction of momentum to trend support provides a bullish tilt, and both oscillators (RSI & Momentum) could provide an early indication of future price action should they break out of their respective patterns.

A daily close above the March-high may carve out a path to test the February-high (0.6775), with the next key region of interest falling at the convergence of 2018 downtrend-resistance and the 50% Fibonacci retracement (0.6820) extending from the January 2018 high (0.8136).