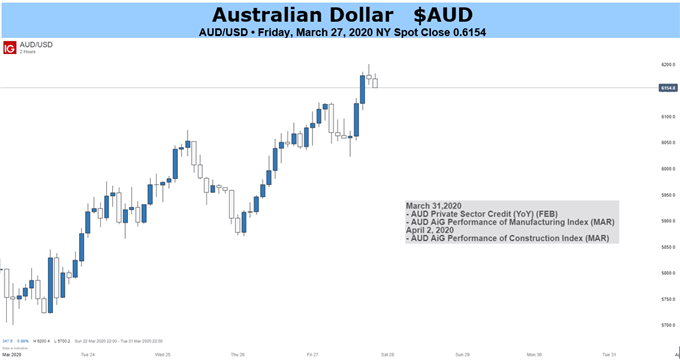 The Australian Dollar market faces a new trading week very short of domestic cues although, even were there a full slate, the spread of coronavirus would still doubtless remain in charge.

Recent sessions have seen the Australian Dollar revive somewhat, along with other growth correlated assets such as stocks and energy. This surprising comparative vigor came even as more economies placed heavy restrictions on economic activity in the hope that taking that hit now would pay of later in containing and reducing infection levels. The real support for risk assets has come in the various massive stimulus and rescue programs now being implemented or discussed across the globe. Trillions of dollars of liquidity have been pledged, if needed, along with more targeted help for hard hit economic sectors.

This monetary and fiscal largesse has even managed to offset some truly horrific economic data, which will now trickle out more and more regularly as the release cycle catches up with the impact of the virus. Worst so far was the release of truly shocking weekly jobless benefit claimant figures out of the US. A rise of over 3 million initial claims in just one week is unprecedented for this series which goes back to the 1960s.

Still, even this huge blowout was hardly unexpected and markets managed to retain at least the appearance of composure. Investors are at least confident that global economic authorities are putting major remedial action in place, and it’s possible that uber-liquid markets could bounce back quite sharply should infection rates start to slow.

Whether there’ll be any sign of that in the coming week is unknowable. The Australian Dollar market is likely to face more bad news in the shape of Purchasing Managers Index releases out of China, Australia’s major export partner, and official retail sales data out of Australia itself. These are almost sure to be extremely week, but the market can by now hardly expect anything else.

We’ve seen in the past week’s trade that the Australian Dollar can rise despite the gloomy headlines as long as investors retain confidence in the authorities. However, the most recent rush of terrible economic news is likely to be only the start, and it’s very hard to see a durable risk asset recovery while that’s the case.

On the basis of what we can know, it’s a bearish call this week. 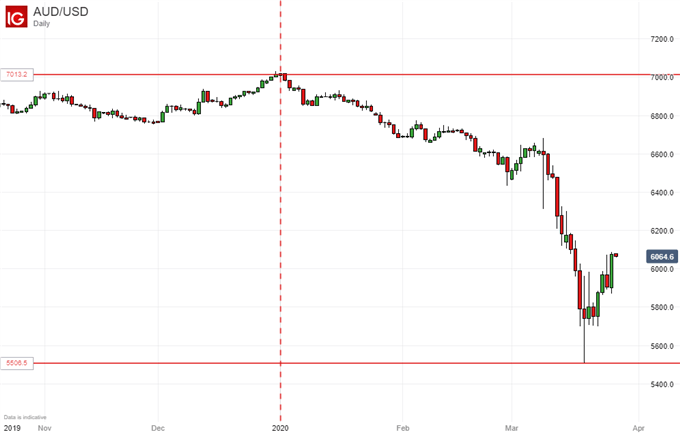