Australian Dollar at Mercy of COVID-19 as China's Economy Slows 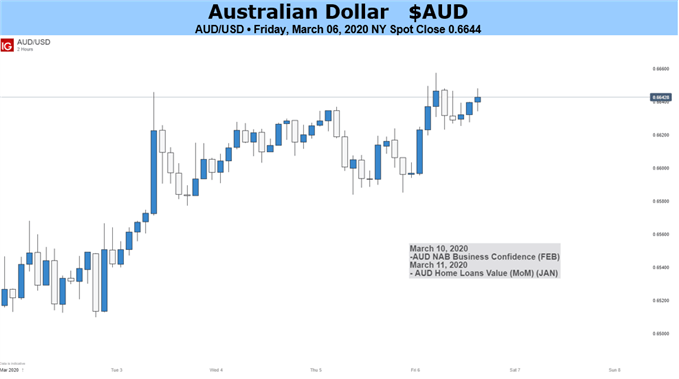 AUSTRALIAN DOLLAR AT RISK FROM CORONAVIRUS

Australia’s export-oriented economy strongly relies on robust Chinese demand as a source of its economic vitality. As such, its health – so to speak – is largely tied to the proverbial immune system of China’s. Right now, the Asian giant reportedly has over 80,400 infections of the coronavirus which has disrupted global supply chains, domestic industrial production and constricted its artery to global commerce.

Two weeks ago, China reported its weakest PMI readings for manufacturing and services on record, with a dismal 35.7 figure for the former, and an all-time low for the latter at 29.6. Since the infected areas also include major industrial hubs like Shanghai and Hong Kong, it naturally led analysts to forecast weaker economic activity in China which is already reporting GDP statistics at a 30-year low. 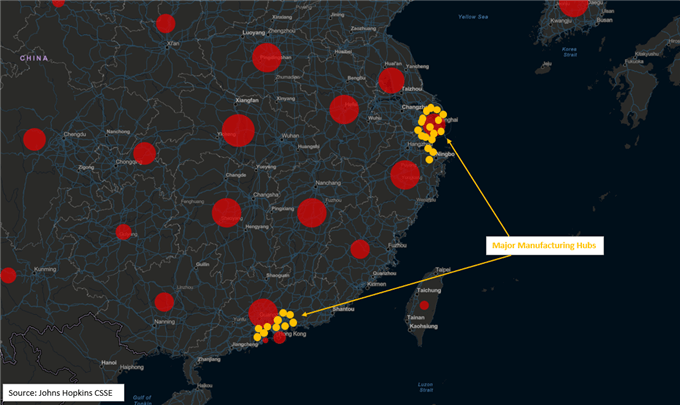 Naturally, this development compromises Australia’s growth trajectory after the outward-facing economy enjoyed a brief interim global stabilization. This was also reflected in Australian Dollar inflation swaps that were trending higher until the outbreak of the coronavirus in late January. Consequently, as the number of cases swelled, future inflation expectations were being deflated.

In light of eroding fundamentals, the RBA recently slashed interest rates by 25 basis points, bringing the overnight cash rate to another record-low at 0.50 percent. Officials said they were prepared to ease policy further if needed in light of the coronavirus’ unexpectedly large impact. Having said that, policymakers noted that once the virus is contained, the Australian economy’s “improving trend” could be expected to continue.

WHY IS THE GLOBAL ECONOMY RESPONDING SO STRONGLY TO CHINA SLOWDOWN?

As the global economy has become more interconnected financially and economically, China’s role in that web has also expanded. Consequently, a disruption in Asia’s economic powerhouse has spillover effects not only to trade partners within its immediate sphere of influence but also to countries that rely on its demand – like Australia. As analysts in the OECD’s Interim Economic Assessment report wrote:

“Output contractions in China are being felt around the world, reflecting the key and rising role China has in global supply chains, travel and commodity markets…Relative to similar episodes in the past, such as the SARS outbreak in 2003, the global economy has become substantially more interconnected, and China plays a far greater role in global output, trade, tourism and commodity markets (Figure 1). This magnifies the economic spillovers to other countries from an adverse shock in China”- OECD

Naturally, concern about China’s demand for key imports like iron ore – of which Australia is the biggest producer of at over 260 million tons in 2016 – weighed on AUD. If the virus continues to undermine growth not just in China but globally, risk appetite for cycle-sensitive assets like the Australian Dollar may further undermine the country’s growth prospects and reinforce the urgency of additional stimulus from the RBA.