Australian Dollar May Be Back to Virus-Watch After RBA Boost 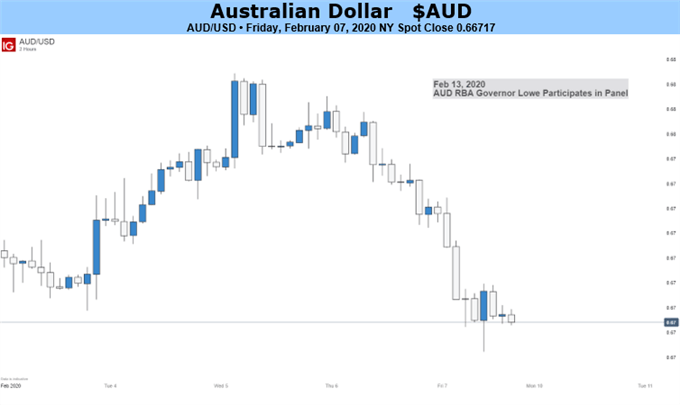 The Australian Dollar has won some respite in the last week or so, thanks to the Reserve Bank of Australia, but it can’t hope for more in coming sessions which are likely to be dominated for financial markets by the spread of coronavirus.

The RBA left interest rates on hold at its first monetary policy decision of 2020, on February 4. This was much as the market expected when the time came. Futures markets had looked for a rate cut earlier in the month. However they priced it out in the face of Australian employment and inflation data which were at least both heading in directions the central bank would like even if question marks lurked behind both headline figures.

Still, AUD/USD perked up in the aftermath of the decision, with bulls also keen on the message conveyed by RBA Governor Philip Lowe. He of course acknowledged that rates could yet go lower (the market agrees, pricing in an April reduction), but appeared quite sanguine about the likely economic impact of both coronavirus and Australia’s vast bush fires.

Lowe told the Australian House of Representative’s Standing Committee on Economics that he expected growth to pick up further, with a new expansion in the resources sector, stronger consumer spending and a recovery in housing market investment later this year.

He also said that the threshold for Quantitative Easing had not been reached, and that he did not expect it to be. The RBA has said before that a 0.25% Official Cash Rate would have to be seen before QE was considered. The OCR is currently 0.75% and admittedly jumpy futures markets reckon 0.50% will be as low as it gets. Suspicions such as these will support the Aussie. 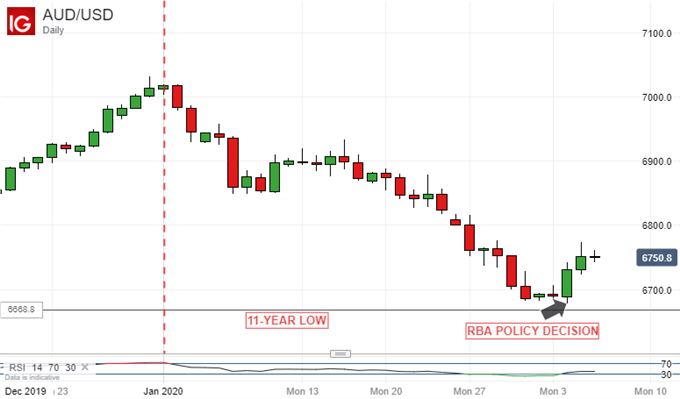 Still, the coronavirus story is likely to dominate market action in the week ahead, if only because Australia is short of first-tier domestic economic events to give a more local steer.

Some Chinese economic data are on tap, with official inflation data and new Yuan loan numbers coming up. Of course, the markets will be on watch for any virus-linked effects, and the Australian Dollar may face headwinds if they’re seen. It’s the foreign exchange markets’ sometime favorite China-proxy bet after all. There may be some spill-over from the Reserve Bank of New Zealand’s Wednesday interest rate decision, but no change is expected, and they may well be limited if the central bank stands pat.

It’s very hard to see the Australian Dollar gaining much ground in this environment, or indeed for as long as coronavirus and lower interest rates dominate its horizon. So, a bearish call this week then.