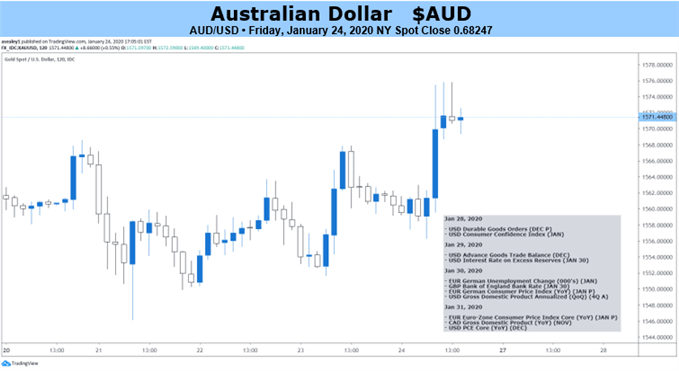 The Australian Dollar moves into a new trading week in a fascinating position, clearly weighed down by a lack of global risk appetite but supported nevertheless by domestic data of which the coming sessions will provide more crucial examples.

AUD/USD remains close to six-week lows, though, with any optimism around a relatively perky Wall Street corporate earnings season and the signature of a long-awaited interim trade deal between Washington and Beijing drained away thanks to the spread of Wuhan-strain coronavirus.

This respiratory disease cannot help but stoke investor memories of 2003’s Severe Acute Respiratory Syndrome (SARS), and the havoc it wreaked on Southeast Asian economies. Chinese New Year travel is in full swing, and cases have been confirmed as far from China as Japan and the United States.

The markets know such diseases can cause economic dislocation out all proportion to their fatal impact, and growth-correlated assets such as the Australian Dollar can be expected to slide whenever the illness dominates headlines. However, when it doesn’t, the market may well be more focused on the Australian economy than usual this week.

Investors must wait until February 4 for 2020’s first Reserve Bank of Australia monetary policy decision. That said, a big pointer is due this week in the form of the official Consumer Price Index (CPI) for the fourth quarter of 2019.

Inflation is expected to have remained below the RBA’s elusive 2-3% target but the headline figure at least may get a little closer to it. Australia and New Zealand Bank are looking for a 0.7% quarterly rise for an annualized gain of 1.9%. That would be much above the third quarter’s respective rises of 0.5% and 1.7% with alcohol and tobacco price rises thought likely to be behind the acceleration.

However, the ‘trimmed mean’ figure focused on by the RBA may not rise much from the 1.6% annualized rate seen last time. If so, the numbers may prove maddeningly inconclusive for interest rate expectations. The Australian Dollar certainly rose on January 23 when official employment data smashed expectations, clearly leading some to price out a rate reduction next month.

However, while overall job-creation held up, full-time positions contracted, extending the weakness in this crucial part of the labor market, and rate-cut expectations have only sharpened since its release. According to ASX the chance of a quarter point cut in the record-low 1.5% Official Cash Rate now stands at nearly 60%.

Faced with that assessment, and the chances that risk appetite could be thin in the coming week, it has to be a bearish fundamental call for the Aussie this week. 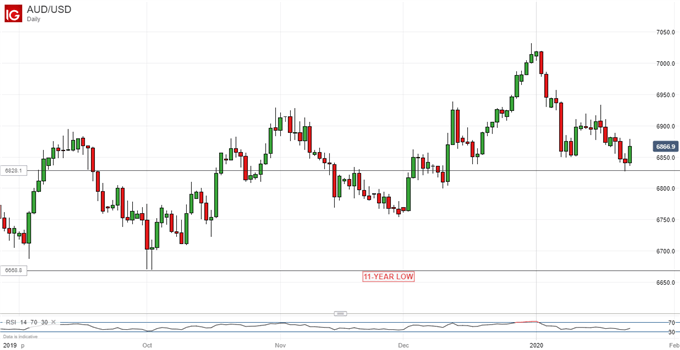