The Australian Dollar was well underpinned this week by a confluence of fundamental factors which served to prop up risk appetite in general and such growth-proxy currencies in particular. Bulls will hope that support will last, and it might, but there’s the major domestic data hurdle of official employment data to get over. That’s coming up on Thursday.

The trouble is that this series has been somewhat hard to predict, even if overall job creation held up impressively through 2019. November’s release served up a blockbuster rise of 39,000 jobs, far better than the 15,000 expected beforehand.

Of course, that strength could be maintained or even bettered in December, but all the same the overall employment rate remains stubbornly above 5% and the chances of a durable fall toward the Reserve Bank of Australia’s 4.5% hope still looks like a very big ask so late in the cycle. All up the Australian Dollar market may try to eschew major moves until these numbers are out, if global conditions allow.

The broad backdrop remains quite supportive however. The US/China trade deal inked at last on January 15 was ultimately quite disappointing, but it may also have been the best markets could reasonably have hoped for at this point. The two sides are at least talking. Australian stocks got a boost from the deal, and the Aussie Dollar did too. Strong Chinese trade data also boosted the Australian currency, which reverted to its sometime role as China market proxy after the numbers. There was also some relief for the Aussie in China’s Gross Domestic Product release. Growth matched forecasts in the fourth quarter with a 6% annualized rise.

There are some clouds on the currency’s horizon. While market pricing has interest rates staying put in February, when the Reserve Bank of Australia will give its first monetary policy call of the year, it’s far from certain. Data from index provider ASX has the chance of a cut priced at 44%. Economists’ opinions are also split. Morgan Stanley thinks a February reduction is under-priced and that the RBA will go for it. Bank of New York Mellon thinks rates will stay put.

These judgments are likely to loom larger as the February 3 RBA date gets closer, but for now trade-related risk appetite remains very much in charge of the Aussie’s fortunes. Assuming this sticks around, and that the employment numbers don’t collapse, then the currency looks well supported going into a new week. 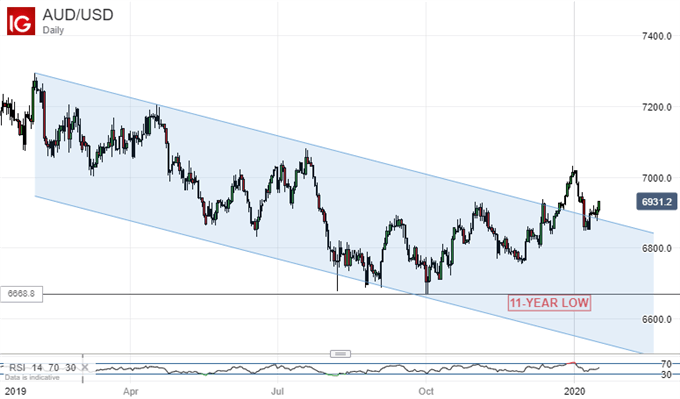