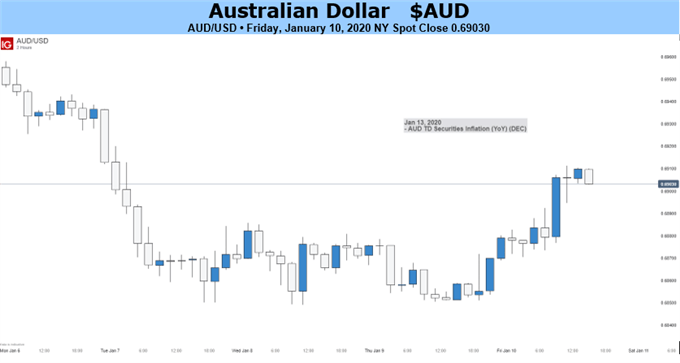 The Australian Dollar dropped sharply in the past none days, hit like most growth-correlated assets by the dramatic if predicable brake on global risk appetite which accompanied January 3’s lethal US airstrike on a key Iranian general in Baghdad and Iran’s reprisals.

That risk appetite has since been stoked a little by hopes that there will be no further military escalation between Washington and Tehran. Should they endure the Australian Dollar may return to the pre-strike favor which saw AUDUSD at six-month highs as recently as December 31. 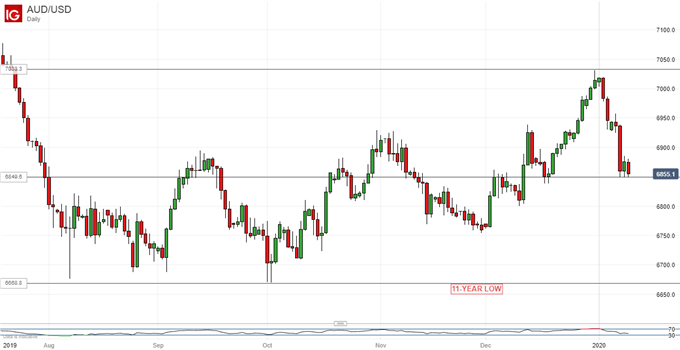 However, there’s a lack of first-tier Australian economic data for the markets to chew over in the coming week, which will probably leave the Aussie as so often hostage to the global weather.

That point is made no less certain by the fact that the next monetary policy meeting of the Reserve Bank of Australia is essentially a coin-toss as far as markets are concerned. The probability of a rate cut is currently held to be just a little less than that of rates remaining on hold, according to data from index provider ASX, although the on-hold tendency seems to be gaining ground.

Still, with crucial Australian inflation and labor data due later this month, investors may feel disposed to hold off on helping the Aussie back to its recent highs even if there is a general risk appetite revival.

More cheerfully, the US and China remain on course to sign their phase-one trade agreement on January 15. While this is unlikely to be any panacea for relations between the two countries, the signing and indications that talks on the more important second phase are coming up, could well see the Australian Dollar gain.

With that in mind it’s a cautiously bullish call this week, even if it seems most unlikely that AUDUSD will retake all the ground it has lost in the past few days.

Whether you are new to trading or an old hand DailyFX has plenty of resources to help you. There is our trading sentiment indicator which shows you live how IG clients are positioned right now. We also hold educational and analytical webinars and offer trading guides, with one specifically aimed at those new to foreign exchange markets. There’s also a Bitcoin guide. Be sure to make the most of them all. They were written by our seasoned trading experts and they’re all free.