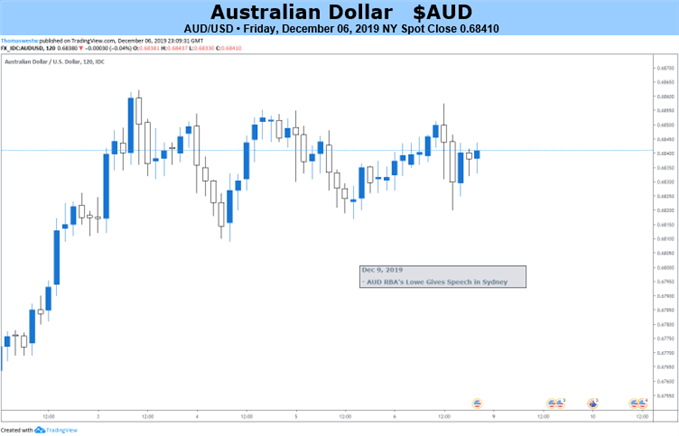 The Australian Dollar lacks the sort of major domestic economic talking points which characterized the past busy week, which will probably leave global risk appetite with a bigger say over where it goes.

The Aussie jumped notably on December 2 when the Reserve Bank of Australia left the key Official Cash Rate on hold at its 0.75% record low. In some ways this was an odd reaction to a result well priced-in to markets before the fact. Still, judging by its commentary the RBA appears content for now to gauge the effects of past rate cuts and, perhaps, hope that holiday-period spending provides some stimulus of its own.

AUD/USD’s gains snapped the downtrend which had previously been in place since early November. 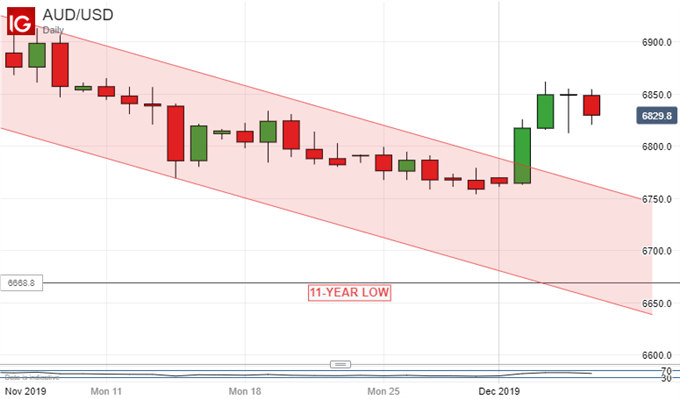 The currency was taken still higher when official third-quarter Gross Domestic Product data came in more or less as expected, a relief in the end as investors had been a little nervous. Still, while growth may be holding up, just, the markets aren’t entirely convinced that this happy state of affairs will endure.

Australian ten-year bond yields saw some big falls in the aftermath of the GDP data, suggesting that market, at least, thinks more monetary loosening will be needed. Indeed, a small but growing list of major banks is prepared to forecast that this will need to go beyond lower interest rates and into the outer reaches of Quantitative Easing (QE), perhaps by late next year.

In his latest speech on the subject RBA Governor Philip Lowe for his part doubted that either QE or negative interest rates seen elsewhere would be needed, although of course he reserves all right of action in pursuit of his mandate. Markets will therefore look eagerly to his next, due in Sydney on Tuesday, for further clues.

Also coming up are snapshots of business and consumer confidence, along with Chinese trade and inflation data, both of which can move the Aussie.

However, in the absence of first-tier domestic data drivers the currency is all too likely to be buffeted by international risk events. The twists of the US-China trade story will probably be chief among these, as will the Federal Reserve’s last policy decision of the year. That’s coming up on Thursday. The Fed is expected to leave rates alone and maintain its data-watching brief. The United Kingdom’s general election will also loom large at week’s end.

The Australian Dollar has been quite sensitive to Brexit news and, with this election effectively yet another public vote on how to move that story on, the currency probably stands to gain if the incumbent Conservative government is returned with a majority.

However, given the Aussie’s lack of monetary policy support, and the unpredictability of trade-deal headlines, it’s still a neutral call this week.